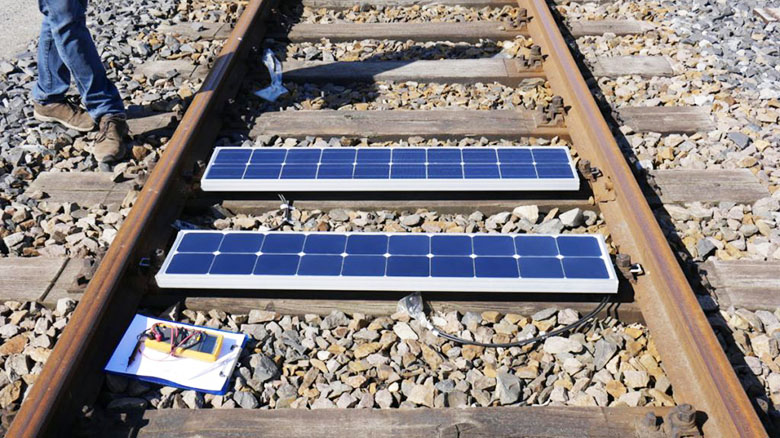 Bankset Energy Corporation has ambitious plans to install gigawatts of solar PV on railway sleepers across the globe. While the first installation took place in Switzerland, work is underway on projects in Germany, the United Kingdom, France, the United States, China and Italy; and gearing up in Austria and Spain. pv magazinespeaks to Bankset Group president, Patrick Buri.

The U.K. renewable energy investor says it plans to cover the world’s railway network system – said to be over one million km long when added together – with solar PV panels.

Bankset Energy began its journey in Bern, Switzerland, on private industrial track connected to the SBB/CFF track; and started installing 200 MW worth of panels on 1,000 km of rail track in Saxony, Germany, in June. The latter is set to be completed in 2019, and extended to 10,000 km by 2022.

The company is also working on projects in the United Kingdom, France, the United States, China and Italy; and is gearing up for more in Austria and Spain, Bankset Group president, Patrick Buri, tells pv magazine, adding that either Bankset Rails Group installs the projects, or it works with several rail specialists, such as Sersa Rail Group.

Regarding project times, Buri says that if the line is completely closed, “we can install 1,000 km in one to four months.”

“Using patented technology, solar panels made of silicone and aluminium are designed to clip over existing railway sleepers. These are currently made from concrete, wood and steel – proven technologies that have stood the test of time,” read a statement from the company on the technology.

It continued, “The Bankset Energy System transforms the existing technology into a cutting edge energy system, without affecting the infrastructure and avoiding the cost of replacing existing sleepers.”

Bankset is also said to be in discussions with a number of sleeper manufacturers to develop the technology and adapt its product to fit all existing sleepers. Responding to which companies, specifically, it works with, Buri says, “For rails we work with Deutsche Bahn Systems Technic and TUV, we have many partners for rails and solar. We also work with Plasser & Theurer.”

Development of the technology in European factories started back in 2013, says Bankset, with €10 million in financing provided by Bankset Investments Ltd, Bankset Energy Ltd and other, unidentified, public and private investors, mainly from the United Kingdom and the United States. Another €300 million is set to be raised in a further financing round.

Buri says that the new financing is ongoing, with most of the initial funds already secured. He adds, “We are looking at new investors now and talking to the largest equity and capital markets.”

Responding to how the generated solar electricity will be sold, Patrick Buri outlined a number of different, potential, business models. These include:

Asked whether the modules will be specially designed to endure the stresses of trains traveling over them, Buri replied that rail networks are divided into three distinct categories: (i) slow rails and parking rails, where there is “no particular stress”; (ii) medium speed secondary lines, where “Bankset energy solar panels are adapted and very resistant. There have been no problems to date; our glass is reinforced and has passed the most stressful tests”; and (iii) high speed lines, where “a very resistant panel is available and offered for all kinds of stress and problems also tested for rails ballast rocks and ice or wind resistant. No major problems, to this end the Bankset Energy solar panel is designed and certified for this purpose precisely.”

In terms of cleaning the modules, Buri says that while most of the cleaning is done by rain, the company also has a special “robot train”, which works with water pressure. “It’s super efficient,” says Buri, adding, “when required, we press the button, our robot train arrives and scans the network with a camera, and a water jet system with ecological product cleans the panels as required.”

For operations and maintenance (O&M), Buri says  the company offers “Bankset Energy certified programs. Or we install, operate and asset manage the entire power plant for our customers turn key.” He adds, “We supervise all the electricity and for rails, we offer the best machines in the industry from the world leaders in rails maintenance – Plasser & Theurer – and we also use machines from ROBEL Bahnbaumaschinen and Siemens.”