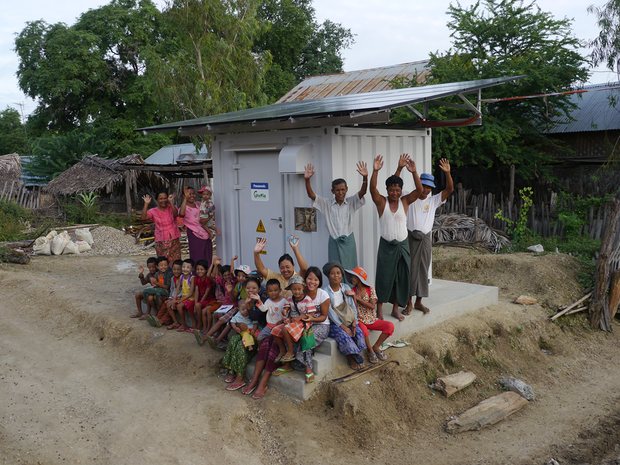 Four feet in length, of aggressive disposition, and deadly poisonous: you don’t want to stand on a Russell’s viper in the dark. Especially if there’s no antivenom for miles around. Yet that’s the daily predicament facing millions of villagers in Myanmar, where snakebites cause about 500 deaths every year.

In Yin Ma Chaung, a rural settlement about nine hours by car from Yangon, villagers can rest easier knowing there are doses of antivenom chilling securely in a new refrigerator in the village’s community centre, powered by solar.

“Antivenom can now be supplied quickly if people in neighbouring villages need it,” says Konosuke Kawahara from Japanese electronics giant Panasonic, which recently installed a 2.82kW photovoltaic (PV) system for the off-grid village.

The example is just one of thousands of off-grid projects being rolled out across Myanmar as part of a huge government-led scheme, which involves private companies too, to bring electricity to the entire country by 2030. As of 2014, only 16% of rural households had an electricity connection.

Myanmar Eco Solutions, a for-profit renewable energy firm, is part of a burgeoning industry looking to contribute to the development of off-grid solutions. It recently set up a solar-powered irrigation system for rice farmers near Pathein, a remote agricultural region in the Ayeyarwady delta in southern Myanmar. The submersible pump is mounted on a raft, meaning it can travel up and down the river supporting multiple villages.

Sunlabob, a Laos-based solar developer, has just installed solar mini-grids in 11 villages in the remote provinces of Shan and Chin. The PV-based systems enable householders to power low-voltage electrical items such as lights, mobile phones and small televisions.

Can off-grid make profits?
At present, almost all Myanmar’s off-grid projects are either government-funded or donor-backed. Panasonic’s fridge-powering power system is financed through charity money from Mitsui & Co; Myanmar Eco Solutions’ raft is seed-funded by the non-profit World View International; and Sunlabob has a grant from the Japanese government for its mini-grid project.

Poverty levels are the most immediate hurdle to off-grid commercialisation. Despite enviable growth rates over recent years, Myanmar is starting from a very low base. It still ranks 148th of 188 countries on the UN’s benchmark development index, with the highest levels of poverty concentrated in rural areas.

“Our original idea was to supply solar home systems because they are relatively affordable,” says Ben Frederick, head of operations for Myanmar Eco Solutions. “But it quickly became apparent that this business model wouldn’t work … Even though the systems we were selling were about $100 [£80], they were still far too expensive for a single farmer to buy.”

Myanmar Eco Solutions’s strategy has been twofold. In the case of the raft project, it operates a revolving fund, with participating farmers making small payments on a seasonal basis. The capital costs of the raft, around $6,000 (£4,800), should be paid back after two years or so, enabling the company to set up a similar project elsewhere.

Commercial Opportunities
Myanmar’s lack of electrification presents a puzzling dilemma for commercial operators. With so many of the rural population having no electricity at all, it is difficult to judge future demand patterns, feasible price points and the reliability of billing systems.

“It’s tricky from a commercial perspective because you can’t go to a lender or a financier and say, ‘Yes, we can prove this is the level of demand and this is the price point people are able to meet,” says Philip Napier-Moore, programme director for solar power in Asia Pacific for the engineering consultancy Mott MacDonald.

The real money for Myanmar’s solar firms lies in providing PV-systems for factories, hotels and other large-scale industrial users in urban areas. Myanmar Eco Solutions, for example, is about to integrate a 1MW solar plant into an existing diesel power station on an island in the country’s Tanintharyi region. Sunlabob, meanwhile, is installing a 117kW solar system in Junction City, a mall and office complex in Yangon. The project is set to be the first grid-connected solar project in Myanmar.

“Businesses and larger energy users are beginning to see the benefit of investing in solar-based electricity given the rising prices of grid-based electricity paired with the high cost of back-up diesel generators,” says Evan Scandling, Sunlabob’s managing director in Myanmar.

Given the demand hurdles, Napier-Moore anticipates Myanmar’s off-grid solar roll-out remaining largely government-led over the coming years. But a commercial model may provide a better guarantee of it working in the long-term, for example with a corresponding growth in a support network of suppliers and engineers.

“Ideally, government-backed initiatives could harness private-sector models so that it helps to demonstrate to financiers that these models are viable rather than being just purely grant-funded,” he adds.