Solar DEMU trains start rolling: This is how much Indian Railways will save 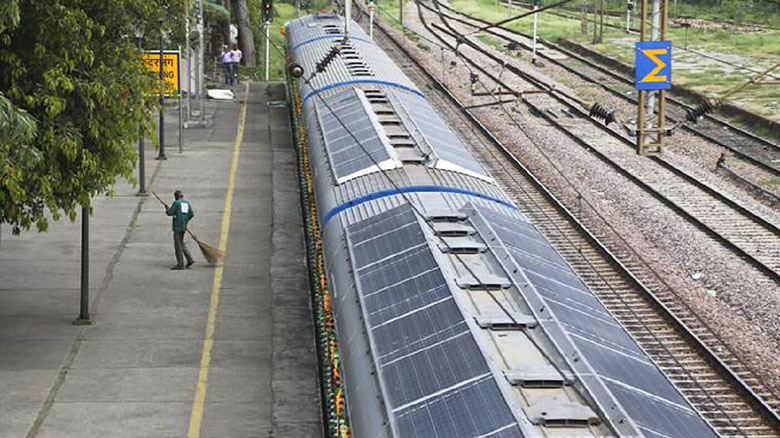 The Indian Railways’ newly launched solar diesel multiple unit trains (DEMU) are expected to save hundreds of crores for the government in fuel bills as well as reduce the carbon emissions. The Indian Railways spends a huge amount of money on diesel to power its trains each year which, apart from the monetary impact, also takes an environmental toll.

To address the issue, the Railways is looking seriously at solar and flagged off a solar DEMU rake recently. The department has already increased the speed of installing rooftop solar in railway stations and railway crossings. The solar DEMUs will take the energy saving plan of the department a step further.

Railways Minister Suresh Prabhu has set a target of saving the Railways Rs 41,000 crore in energy expenditure over the next 10 years. For that, the solar power project is crucial. In the 2016-17 budget, Prabhu targeted setting up 1,000 MW solar power generation capacity to reduce the reliance on diesel.

According to an energy policy report published by the Indian Railways in November 2016, the cost of energy consumed by the Railways is 24.16 per cent of its ordinary working expense which breaks into 14.72% diesel expenditure and 9.44% on electricity. The diesel bill of the Railways increased from Rs 7,297 crore in 2007-08 to Rs 22,716 crore in 2014-15. It is one of the largest consumers of diesel fuel in India. In 2013-14, the diesel consumption of Indian Railways was around 2.6 billion litres, as per official data.

According to the Railways, the solar DEMU system helps reduce carbon footprint of these commuter trains and cuts carbon dioxide emission by 9 tonnes per coach per annum. It projects a saving of 21,000 litres of diesel per DEMU train with six trailer coaches and that will translate into savings of Rs 12 lakh per year. The proportional rise will be seen as coaches increase to 10 coach rake with eight trailer coaches. The Indian Coach Factory (ICF), Chennai has manufactured the new train which will run on a 1,600 hydraulic horsepower (HHP) DEMU unit.

The Divecha Centre for Climate Change, Indian Institute of Science, Bangalore conducted a research and trial runs of such DEMU rakes and projected an ideal return on investment period of about 7.5 years. However, it said that the period could go up to as much as 10.6 years if the annual rate of depreciation of the solar photovoltaic system is considered. The coach has a life of 25 years. Considering the fact that Indian Railways operates over 63,500 coaches and most of them are exposed to sunlight of at least 300 days on average according to the Railways, this system could be expanded to save hundreds of crores of rupees for the department.

The newly built coaches have a passenger capacity of 89 people for one coach. In each train, two coaches are motor coaches on each end of the train. The passenger coaches in between are called trailer coaches. Each passenger coach costs Rs 1 crore and the motor coaches cost Rs 2.5 crore. Each solar panel that is installed on the rooftops of the trains cost Rs 9 lakh. A total of 16 solar panels are installed on each coach on the train and each generates 300 watts of power. The power that is generated through these panels, will be used in the train for non-daylight operating hours.

For now, the train has been flagged off between Sarai Rohilla station in Delhi to Haryana’s Garhi Harsaru Junction. The train will operate in place of the non-solar powered rake on the route.

The fare of the coach will remain the same and with reduced operational costs, it means increased returns for the Railways. Railways Minister Suresh Prabhu estimates the return to be as much as 20 per cent.

The IISc estimated that the annual power yield in a solar rail coach will be between 6,820 and 7,452 kWh. This would result in an annual saving of 1,862 litre of reduction in diesel consumption per coach per annum. It would also decrease CO2 emission of around 4.5-4.9 tonnes. The study estimated that if all the 63,511 coaches under operation are accounted for and considering the Railways employ 20 coaches on average in a train, the solar rail coaches could generate 433,145,020 kWh of electricity per year. This would save 108,476,788 litres of diesel in a year. The total CO2 emission reduction would then stand at 2,88,339 tons. The move would save the Railways a lot of money and help in achieve its climate and energy goals.