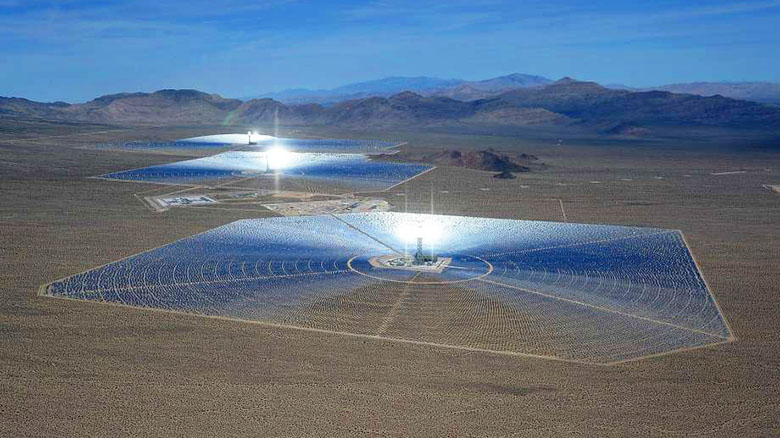 The Ivanpah Solar Electric Generating System is one of many that contributed to a new milestone for renewable energy in California.

For three hours on March 11, solar power met roughly half of all electricity demand across a big swath of California, according to a new estimate from the federal government.

Even for a state used to setting renewable power records, it was a milestone. And while temporary, it will doubtless happen again as the state advances toward its goal of getting half of all its electricity from renewable sources by 2030.

The estimate came from the U.S. Energy Information Administration, the statistics branch of the Department of Energy. The administration used data from the California Independent System Operator, which manages the electricity grid across 80 percent of the state and part of Nevada.

Between 11 a.m. and 2 p.m. on March 11, almost 40 percent of the electricity flowing across the ISO grid came from large-scale solar power plants, a record. California has enough big solar facilities to generate up to 9.8 gigawatts of electricity, nearly the output of 10 nuclear reactors.

In addition, homes and businesses in the area served by the ISO grid now have enough rooftop solar panels of their own to generate up to 5.4 gigawatts of electricity. Factor in the electricity they produced for their owners on March 11, and solar met half of the overall electricity demand in the middle of the day, the administration estimates.

And that’s not counting other types of clean energy.

Add in electricity generated by wind farms, geothermal plants, biomass plants and small hydroelectric dams, and together, renewable sources briefly accounted for 56.7 percent of all power on the grid on March 23, said ISO spokesman Steven Greenlee. That’s another record.

The surge in renewable power, while a key part of California’s fight against climate change, does create its own set of problems.

Already, California produces so much solar power on bright summer days that not all of it can be used. Instead, it is shunted off the grid, in a process known as curtailment.

“We’re seeing the potential for more curtailment this summer,” Greenlee said. “The thing is, we’re seeing this happen sooner than our initial analysis suggested.”

When solar surges, the ISO also solicits bids from fossil-fuel power plant operators to scale back their own output or shut down for hours at a time. It’s a tricky balance, however, because solar production drops sharply in late afternoon and must be replaced by fossil-fuel generation. And while some newer natural gas plants are designed for quick starts, most need a long time to shut down or start up.

“Once you turn it off, it takes hours and hours to cool down, then to restart it takes hours, too,” said Chris Namovicz, lead renewable analyst with the Energy Information Administration. Plants burning fossil fuels use that heat to generate steam, which then runs through a turbine to produce electricity.

“You know how long it takes to boil a kettle on your stove, so imagine having to boil a big tank of water,” Namovicz said.

The flood of midday solar power has even caused wholesale electricity prices in California to periodically drop below $0 per megawatt-hour.

In those situations, power plants that keep running must pay utilities to take electricity, rather than the other way around, Namovicz said. Many plant operators continue running anyway, because they can charge higher prices in the late afternoon and evening and make up for what they lost earlier in the day. But that’s a business decision each operator must make.

“If you shut down, it may be 9 p.m. before you can start up again,” Namovicz said.

In the long term, many analysts say California will need affordable large-scale energy storage technologies to meet its 50 percent renewable energy target. While companies are racing to develop batteries that can sock away vast amounts of solar power during the day for use at night, very few grid-scale batteries have been deployed in California.

“We do think storage holds great promise, but it’s not going to help us this year or the next,” Greenlee said.