Solar or clean coal? Telstra and other corporates take energy security into their own hands 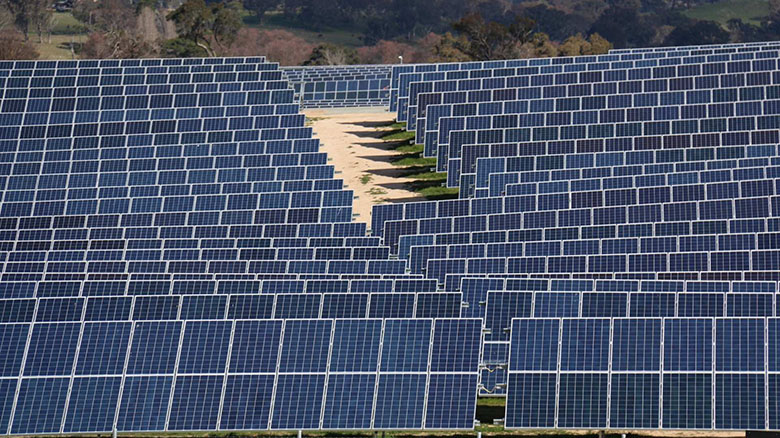 Australia’s chief scientist Alan Finkel is due to hand down his widely anticipated report into the future security of the national electricity market later this week.

He is expected to recommend either a low emissions target or some kind of emissions intensity scheme, to help Australia reach its Paris climate targets and restore certainty to the energy market.

Despite continuing political wrangling over energy policy, the cost of renewables keeps falling, even while electricity prices rise.

This has seen some big businesses take matters into their own hands, by investing in large-scale solar projects to rein in their power costs.

Telstra’s solar deal
Last week, Telstra announced it had inked a deal with a new 70 megawatt (MW) solar farm near Emerald in Queensland to insure itself against rising power prices.

It is one of the biggest Australian companies to sign a solar long-term power purchase agreement (PPA).

Telstra has teamed up with the renewable energy developer RES Australia to buy all the output of the solar farm.

Executive director of Telstra Energy, Ben Burge, says it is all about risk management.

“Energy is largely a commodity market not dissimilar to currencies and interest rates,” Mr Burge said.

Under a PPA, a business can buy power on a long-term contract without having to own the asset that produces the power, explained Andrew Richards, chief executive of the Energy Users Association of Australia (EUAA).

EUAA is an organisation which represents the energy interests of big business.

Mr Richards said, “Typically in the past they’ve been signed between an energy retailer and a developer of a project, whether that be a wind farm or any other kind of energy project.

“What we’re seeing now is more and more companies – the end user – going directly to the developer to sign those deals directly.

“So in other words they’re cutting out the middle man and hopefully trying to get some cost savings in doing so.”

The solar farm Telstra has partnered with is expected to create around 200 much-needed construction jobs in Queensland when ground is broken later this year.

The energy is expected to start flowing in 2018, but Telstra will not be using that power.

Instead, it is all about hedging against higher prices.

“This is a financial position that offsets our underlying exposure to energy costs in our own business,” Mr Burge said.

“It’s a grid-connected project, but once the electrons hit the grid they’re fungible with all the other electrons in the system. So in terms of its effect on our financial position, it’s as good as directly consuming the energy from the project.

Telstra consumes about one per cent of the power in the National Electricity Market, so it has been hit hard by rising prices.

But it is not alone.

Sun Metals invests in solar
The Korean-owned zinc refiner Sun Metals has also taken the plunge, with construction starting last month on a 125 MW solar farm at its refinery near Townsville, creating 210 construction jobs along the way.

Sun Metals will be using the energy from the solar farm to power its refinery, and it is expected to supply about a third of the site’s current baseload power needs.

It is the first large-scale solar farm to be built directly by a major energy user in Australia.

Sun Metals hopes the project will also support its plans to expand its refinery.

“It’s very early days in this emerging trend but clearly we’re starting to see the costs of renewable energy come down,” he said.

“Unfortunately we’re seeing the costs of fossil fuels go up, and those two trajectories are crossing over.

“So it’s starting to make more sense for people to get involved in more of these long-term PPAs with renewable energy.”

And he sees few limits on the kinds of business that can do it.

“Over time it may become more doable for more companies… it’s very early stages of this sort of contracting,” Mr Richards said.

“If you have a fairly steady state of demand for energy then something like a solar farm can be accommodated within that portfolio.”

But not everyone is on board.

Glencore’s response
The global mining giant Glencore is considering ending copper processing at its Townsville site not far from Sun Metals, as well as at Mt Isa.

In a statement, Glencore said energy currently makes up about 35 per cent of overall costs at its copper processing sites.

“Like any mining or industrial operation in Australia, we have been proactively investigating all options to reduce costs throughout the past four years,” a Glencore spokesman said.

“Our focus is on investigating options for secure, affordable and reliable energy/electricity supply at Mt Isa and Townsville to service our operations.”

The company has written to Prime Minister Malcolm Turnbull and Queensland Premier Annastacia Palaszczuk, saying the ongoing viability of its Queensland copper business is under threat.

As well as energy, it has been hit by rising labour, rail and freight costs.

Two thousand jobs are potentially on the line.

Glencore’s electricity prices have doubled in just three years, and it says the Renewable Energy Target adds around $30 million to its annual electricity costs at the two sites.

Globally, Glencore sources 19 per cent of its energy needs from renewables — but that is chiefly from hydro power sources.

It says solar is not suitable for its business here.

“Solar and wind are not suitable for the delivery of a constant energy supply to industrial users, given their intermittency.”

But Telstra’s Ben Burge believes even a heavy industrial user like Glencore would find this economic.

More certainty needed
While each company will make its own decisions, one thing everyone seems agree on is the need for certainty.

With Donald Trump pulling the United States out of the Paris climate deal, Mr Richards said a lot is riding on the recommendations of Alan Finkel’s report.

“We hope that the Finkel review will be a bit of a circuit breaker in the market,” Mr Richards said.

“There’s been 10 years of policy uncertainty around energy and climate change policy in particular and that’s made it very difficult for investors.

“One thing is for sure, we can’t have another 10 years of what we’ve just had because prices will continue to go up and reliability will fall.”