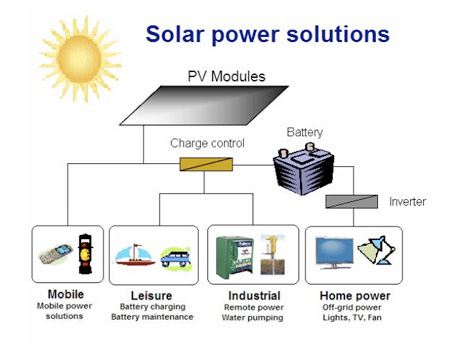 About Solar Power Applications
Depending upon your needs and where you live, there are a variety of solar power systems that could work for you.

When your solar power system produces more electricity you need,  you can sell the excess to the PG&E, who delivers the clean, renewable energy to other customers. Consequently, the good you do for the environment doesn’t stop at your home or office. Even neighbors without solar power can draw upon the renewable energy of the sun – while you bank credit to offset the utility-generated power you use at night.

Solar Power Systems – Grid-Tied with battery backup
Solar energy panels combined with batteries and generators for grid-tie applications couple the clean, power supplied by solar panels with the assurance that you will have electricity even during power outages that last for extended periods. During the day, the solar panels generate electricity as needed and charges batteries. If more power is required, or the batteries begin to run low, the natural gas or propane generator kicks in to recharge the batteries. It automatically shuts off when the batteries are fully charged.

Solar Power Systems – Off-Grid
Standalone, or off-grid, solar power systems consist of solar panels and a battery bank. They are typically used in rural areas and regions where there is no access to the utility grid. They may also be appropriate where the grid is somewhat close to the site, but expensive to bring in – for example, across a neighbor’s property. We have installed a number of systems with battery back-up where the grid is available but where the homeowner has experienced unreliable power in the past or believes that he/she will be subject to power outages in the future. We have seen a number of property owners install battery back-up system just for philosophical reasons, for the desire to be independent of the grid and the “gaming” to which utility companies and their power suppliers have subjected customers in the past.

It may cost you as high as $50 per foot to bring utility power to your property, after which you’ll continue to pay for power forever. It’s often less expensive to add a solar energy system from the start and be your own power company. You can add the solar power system cost to your mortgage, reducing the combined costs of mortgage and utility bills.

Hybrid power systems combine various sources of electrical generation, and are well suited for electrification. Solar and wind technologies are modular, and seasonal variations of sun and wind often complement each other.

Advantages of Solar Power
The first commercial use of photovoltaic cells nearly 50 years ago was powering communications satellites in near-earth orbit. Today, the declining cost and increasing efficiency of solar energy technology has given rise to practical applications on earth – from powering personal electronic devices, homes and factories to generating utility-scale power.

Solar energy provides a huge advantage for satellites because they can be launched into orbit without the added weight of a fuel supply. But the advantages on earth are even greater: Solar-generated energy provides abundant and pollution-free energy that’s not dependent on fuel-delivery infrastructures, foreign relations or the price machinations of energy brokers and big business.

Moreover, solar power generation provides energy when and where you need it, and is highly scalable to match your electrical demand. Since solar energy cells have no moving parts, they are reliable and easy to maintain.