Victoria to get its first large-scale solar plants 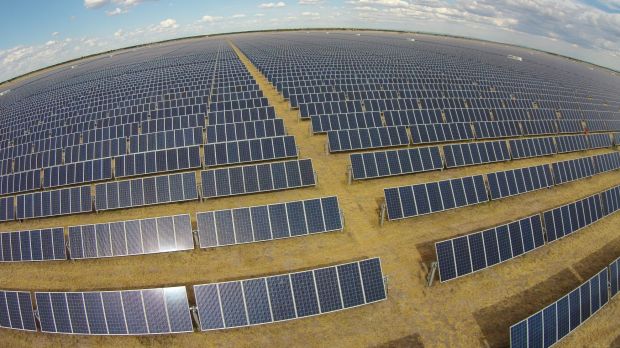 After years of unfulfilled promises, Victoria is on the cusp of getting its first large-scale solar power stations. Three farms in the state’s northwest are promised to be operating by the start of next year.

With a combined output of 320 megawatts, they are expected to produce enough electricity to power Geelong, Ballarat and Bendigo when running at full capacity.

The $500 million announcement comes amid a heated political debate over the future of energy. The Turnbull government is attacking Labor state governments and the federal opposition for supporting ambitious renewable energy targets, and considering taxpayer funding for new coal-fired power stations.

Overland Sun Farming chief Brett Thomas said the three farms would rely on incentives from the bipartisan national renewable energy target to be built, but that the price of solar had fallen to a point where they did not have to wait for a planned Victorian scheme.

Under the Andrews government’s policy, a fifth of new generation built to meet a target of 40 per cent renewable electricity by 2025 would be large-scale solar.

“I think the Victorian program will be great for the industry and will support the volume that the government wants a lot more quickly for projects that aren’t as economically efficient as ours, but at the moment we don’t need it,” Mr Thomas said.

He said the renewable energy industry was buoyant due to higher power prices that reflected the real cost of electricity, the falling price of new technologies and the greater availability of equity at low interest rates.

“My assessment of the debate at the moment is that it will be very hard to build new coal in Australia. If you look at international companies like Engie [the French majority owners of the Hazelwood coal station, which closes next month] and others pulling out of coal it is hard to see companies wanting to do new coal here.

“I think you can probably argue that very shortly [renewable energy] prices will be at the point that black [fossil fuel] power is at anyway.”

The highest profile of several promised, but not delivered, solar plants in Victoria was a 2000-dish solar farm near Mildura. Silex Systems walked away from the proposal in 2014, blaming uncertainty created by an Abbott government review of the renewable energy target.

​Mr Thomas said unlike previous proposals Overland had council approval, full finance and a contract to connect to the grid. The three plants, which are a joint venture with British company Island Green Power, are scheduled to be running by January 1.

It comes as the Andrews government is calling for expressions of interest to build Australia’s first grid-scale battery storage facility to help with power grid reliability.

It says the 20 megawatt battery will be built in the northwest or southwest of the state.