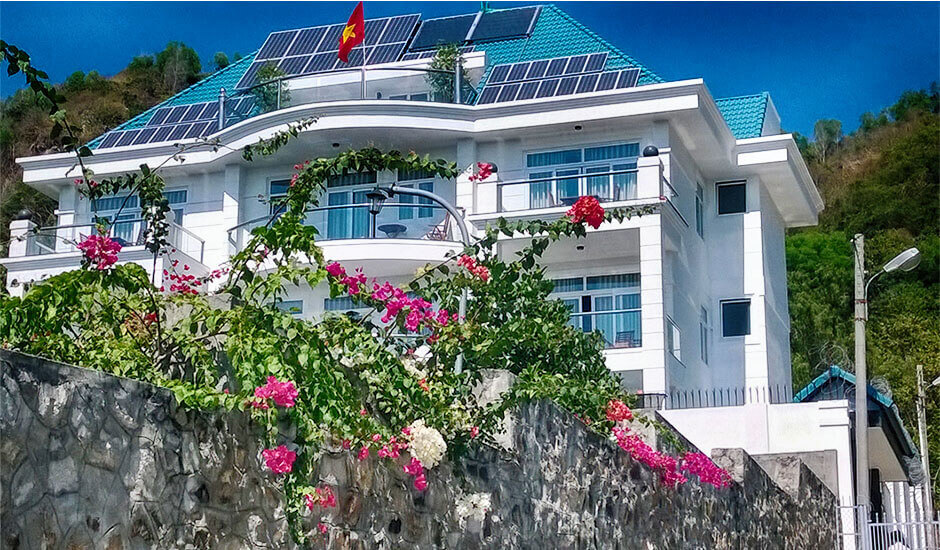 Vietnam is considered a nation with high solar potential, especially in the central and southern parts of the country. Solar energy intensity on the average is 5 kWh/m2. The intensity is lower in the North at about 4kWh/m2 due to the annual winter-spring cloudy and drizzle sky (To Quoc Tru, 2010). The average sunshine at 150kcal/m2 in Vietnam is between 2,000-5,000 hours, which leads to a theoretical potential of 43.9 billion TOE (To Quoc Tru, 2010; Trinh Quang Dung, 2010).

Solar energy in Vietnam is available all year round, is rather stable and distributed widely over different eco-geographical areas. Solar energy, especially in the southern and central regions can be used on average 300 days per year. It can be exploited to meet the two main demands: thermal and electrical power (To Quoc Tru, 2010).

Photo-voltaic (PV) modules are generally imported while some balance-of-system components are locally manufactured. The national telecommunication company (VNPT) and EVN own subsidiaries for the design and installation of solar electric systems for their own internal needs.

In Vietnam, solar energy applications have been increasingly developed since the 1990’s (Trinh Quang Dung, 2010).  Figure 2 shows the development of PV power in Vietnam in the last 10 years from 1998 to 2008. The applications include solar electricity for homes and service centers, solar water heating systems, solar PV power, solar drying and lighting. The Hybrid Technology of RE source, namely the Manicub, has been also introduced in solar boats, solar ambulances and solar villas (Trinh Quang Dung, 2010).

Among various uses, solar water heating technology is considered the most commercially viable, effective and popular.

Although the solar energy resource in Vietnam has been recognized with huge potential, there has been not much attention on its development yet. Most projects throughout the country are at small scale and focused on harvesting heat solar energy. Huge up-front investment cost is the key reasons hindering solar development in Vietnam.

In terms of R&D, investments in solar energy are significant. The financial resources for PV research activities have come from international organizations and the Government. Most typically are the investments in building the semiconductor laboratory at Vietnam National University – Ho Chi Minh City (US$ 5 million) and the Nano-Lab of High Tech Park Ho Chi Minh City (US$ 11 million) (Trinh Quang Dung, 2010).

The PV application research has been ongoing in Vietnam since 1990. A number of new applications have been successfully designed and set up such as the Solarlab’s Hybrid Technology of Renewable Energy sources (Madicub) used in solar ambulances, solar boats and solar villas and the solar grid connected –SIPV also by Solarlab. Thanks to advanced technology and competitive pricing, some PV technologies “made in Vietnam” have been transferred to Asian countries such as Cambodia and Bangladesh (Trinh Quang Dung, 2010).

The major organizations active in implementing solar energy systems are the Solar Laboratory of Vietnam Science Institute (Solarlab) based in Ho Chi Minh City, the Institute of Energy in Hanoi and the Renewable Energy Centre of the Hanoi University of Technology.

Under a solar power cooperation program between Solarlab, the French Ministry of Foreign Affairs, Electricite de France, and the European Union, the Vietnamese-French Friendship Solar Station was established in Ho Chi Minh City. This station conducted a program of solar electricity provision in the provinces of Gia Lai, Quang Nam and Binh Phuoc (IEA, 2005).There is also a major SELCO project, in cooperation with the Vietnamese Women Union, which has over 600 systems in operation (Australian Business Council for Sustainable Energy, 2005).

PV systems ranging in capacity from 500 Wp to 1500 Wp have been installed in provinces of the southern region in households, hospitals, schools and village communities (Australian Business Council for Sustainable Energy, 2005).

Production of photovoltaic cell (PV cells) began in Vietnam in the mid 1990’s. The solar cells of crystalline silicon were made at Solarlab during 1990-2000. A closed cycle of solar module manufacturing has been established and the first solar module made in Vietnam was issued in 2000. The government supports to transfer the latest PV technologies to Vietnam as well as attracting investment from abroad to local manufacturers in setting up PV industry in Vietnam (Trinh Quang Dung, 2010).

Solar water heating is a rather mature technology and commercially viable having been applied at both the household and industrial levels. Households and businesses have been willing to invest in solar water heaters due to savings on electricity bills. So far, solar water heating has been able to easily mobilize investment from private sector.

To promote the use of solar water heating in the framework of the National Target Program on Energy Saving and Energy Efficiency, EVN designed a program on solar water heating systems in 2009. The program promoted research, production and imports of solar water heating equipment for use in households and other service sectors such as commercial centers, condominiums, hospitals, schools and governmental offices. The households who participated in the program received a subsidy of VND 1 million (~US$ 50). Participating in this program have been electricity companies around the country, solar equipment companies, and the Office of Energy Saving and Efficiency. So far EVN has built 900 pilot water heating systems using solar energy by PC2 (200), PC-HCMC (300), Dong Nai PC (200), and Da Nang PC (200). The program is continued with a plan to build an additional 1,000 water heating systems by PC2 (200), PC3 (250), HCMC PC (300), Dong Nai PC (150) and MTV Da Nang PC (100).

Utilization of solar energy including water heating is also highly promoted in the army.  The Department of Science and Technology of Ministry of Defense is in charge of researching and promoting the use of solar energy in the army. So far there are about 10 solar water heating systems being installed in various army schools and facilities, especially in those located on islands areas. [1]

Nevertheless the level of application of solar water heating system in Vietnam is still low. There are only 60 collective and just over 5,000 household systems installed.  About 90% of these solar hot water systems are used in urban areas and 5% in rural areas. Approximately 99% of those systems are household investments and 1% belongs to other public facilities such as nurseries, kindergartens, clinics, hospitals, schools, hotels, restaurants. Collective systems have solar panel areas ranging from 10 to 60m2, which can produce daily from 1 to 5m3 hot water at 50 to 70oC.  Household solar hot water systems have panel areas ranging from 1 to 2 m2, which can produce 100 to 300 liters of hot water at a temperature from 40 to 70oC daily [2].

Solar power in Vietnam is applied in rural and mountainous areas, remote areas and islands (To Quoc Tru, 2010. About 4,000 families have benefited from Solar Home Systems (SHSs) and 12,000 people around Vietnam are receiving solar electricity from the PV system. Total PV installed capacity reached to 4MW by 2010 (Trinh Quang Dung, 2010).

Many solar power projects have been developed in Vietnam during 1990-2008 including:

3) Grid-connected and rural electrification conducted by Solarlab under cooperation with MOST Vietnam and Atersa Spain, 2006-2009

Investment in solar energy is considered profitable only for solar water heating, especially when the equipment can be produced domestically. Solar power for the national grid is less profitable because its cost of production is higher than other generation sources. Household scale solar power is economically negative because of high cost but low generation quality.