How Georgia Became A Surprising Bright Spot In The U.S. Solar Industry 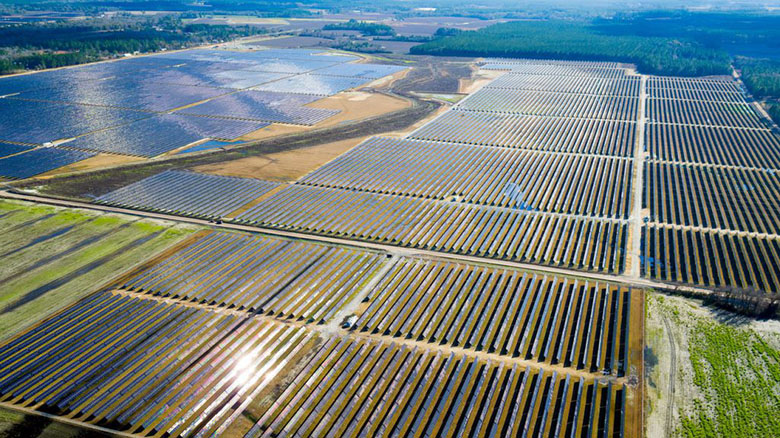 And in a big move last year, Dalton added a new industry to its manufacturing mix: the largest solar panel assembly plant in the Western hemisphere, a $150 million investment.

This is just one sign that in Georgia, solar is booming.

And it’s not for the reasons you might expect. Like most states in the Southeast, Georgia doesn’t have the kind of state-level mandates that have propelled the growth of renewable energy in other parts of the country. Nor is it because of a groundswell of public concern over climate change or the need to curb greenhouse gases.

Instead, there are powerful market forces at work. The U.S. is the second-largest market for solar in the world, after China. Ever cheaper and better solar technology, available land and lots of sunshine are driving demand for massive, utility-scale solar projects across the American Southeast.

“This is the largest region for solar installations in the next five years,” says Scott Moskowitz, director of strategy and market intelligence for Hanwha Q Cells America.

Solar In The Southeast: How Does Georgia’s Boom Compare? 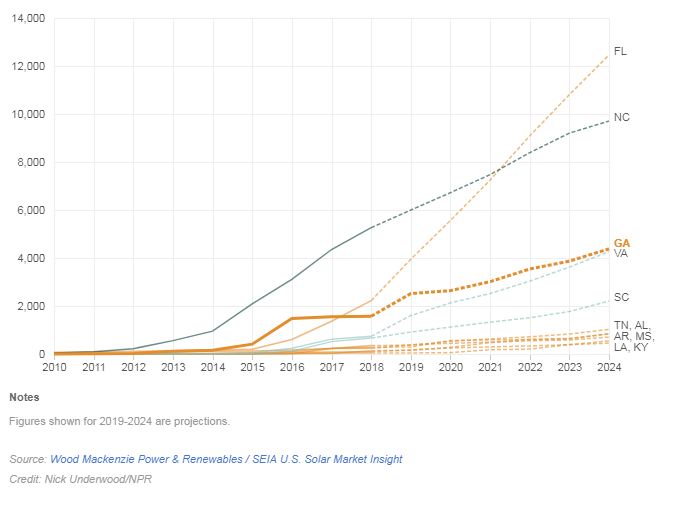 Headquartered in Seoul, South Korea, Hanwha showed up in Dalton in early 2018, says Mayor Dennis Mock. “They knew we were good for manufacturing jobs and plenty of them,” he says.

Today, the Dalton plant runs 24/7, employing 600 American workers who operate the high-tech assembly lines imported by Hanwha from Korea. The solar cells — the parts that actually convert sunlight into electricity — are also manufactured in Korea. They are not currently subject to tariffs, but they could be next year, when a quota on cell imports will likely be reached. Operating at capacity, the factory is now assembling 10,000 panels a day.

“Tariffs have made it such that for the time being, this is the most attractive place to assemble panels for use in the U.S. market,” says Moskowitz. “The vast majority of these will end up in projects in the U.S.” 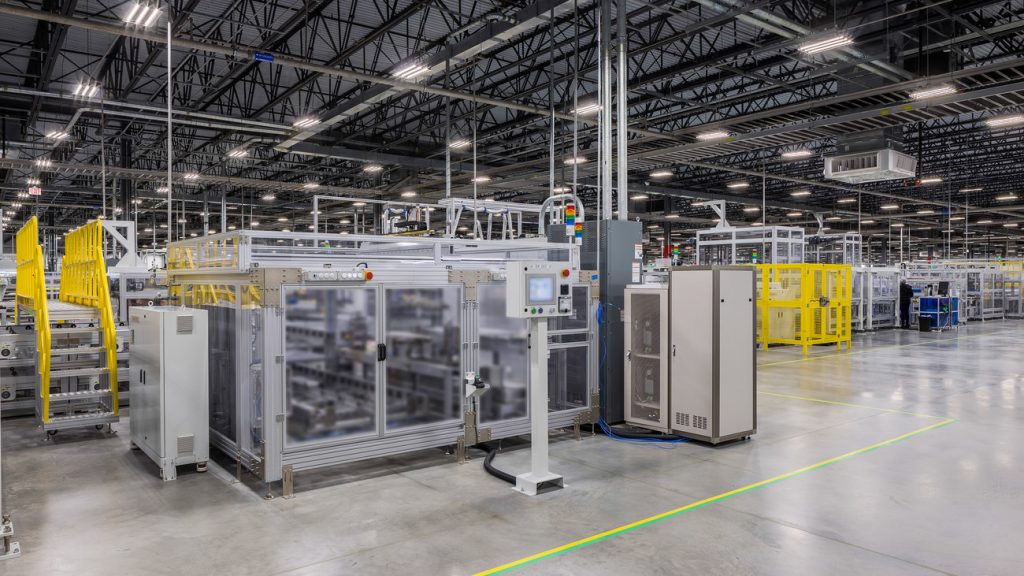 The Hanwha Q Cells assembly plant in Dalton, Ga., assembles 10,000 solar panels a day. The factory was announced at the end of May 2018 and production began in January 2019. Hanwha Group

One of those projects is a new Facebook data center that’s under construction in Newton County, Ga., about 45 miles east of Atlanta. Data centers represent more than 90% of Facebook’s energy demand, says Paul Clements, the company’s director of energy and infrastructure, and even with an energy-efficient design, this one is projected to use the same amount of electricity as a small- to mid-size city.

Access to renewable energy at a competitive price is a big part of what brought Facebook to Georgia, Clements says.

“We have to have access to 100% renewable energy for our facilities. If we’re unable to achieve that, we won’t locate in that region,” he says.

The cost of installing solar has fallen by more than 70% in the past decade, according to the Solar Energy Industries Association. With that dramatic a drop in price, solar is now cost-competitive with traditional forms of energy, even natural gas. Federal tax credits enacted in 2006 also have been helpful.

“We’ve found that when we go into new regions and are able to access renewable energy, that we typically are able to achieve lower electricity rates than we would through a normal nongreen energy solution,” Clements says.
In Georgia, the company that’s providing Facebook’s access to solar is Walton EMC, an electric cooperative based outside Monroe, Ga.

As recently as 2010, Walton EMC relied on coal for almost half of its energy production. Now, natural gas is the dominant source. Renewables make up a tiny fraction — less than 1% of the mix. However, with the solar projects coming online for Facebook, renewables will jump to somewhere between 15% and 20%, according to Greg Brooks, Walton EMC’s community and public relations director.

And all signs point to continued growth. As word of the Facebook deal has gotten out, Brooks says, Walton EMC has gotten inquiries from other like-minded companies.

A lot of land is needed for solar farms big enough to power a Facebook data center. And land in northern Georgia is expensive. As a result, the solar boom is reaching Early County in the state’s farthest southwest corner — peanut, corn and cotton country. 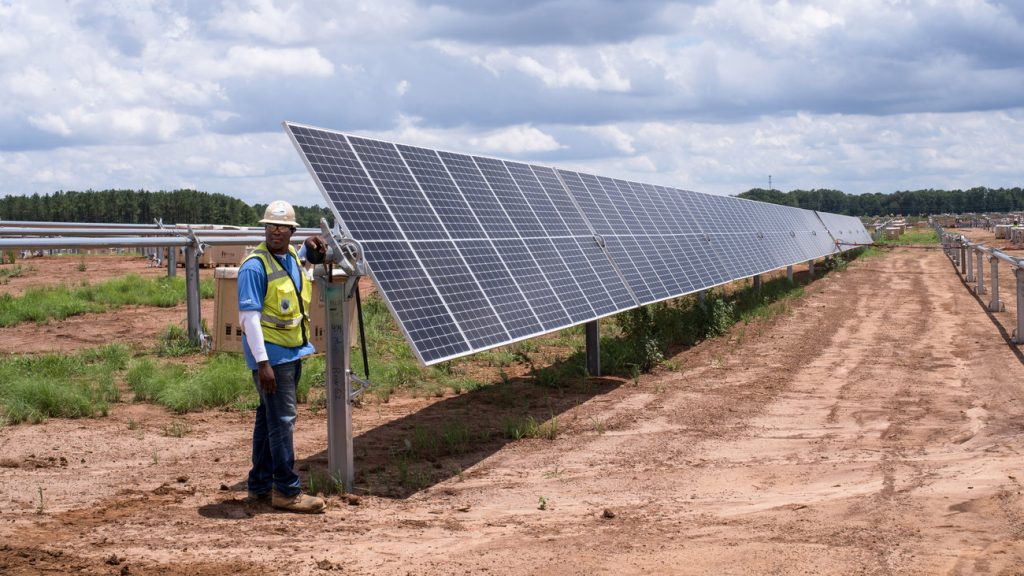 County officials first got word of interest from solar developers about five years ago. Solar companies had used historical data to pinpoint where they could get good sunlight on large tracts of land near transmission lines. At first, developers came with offers to lease farmland for solar projects, a proposition that made landowners unfamiliar with the industry uneasy.

Then last year, Steve Singletary, whose family has owned land in Early County since the 1930s, got a different kind of offer, one he couldn’t turn down. Nashville-based Silicon Ranch wanted to buy 1,400 acres, about a quarter of his family’s land, to build one of the solar farms that would power the Facebook data center, 200 miles away.

“Hate to see it go,” Singletary says, “but things change, and it was a golden opportunity. So we took advantage of it.” The timing was right, he explains, since no one in his family farms anymore — they’d been renting the land out to others. The money was good, and the terms seemed sound, he says. 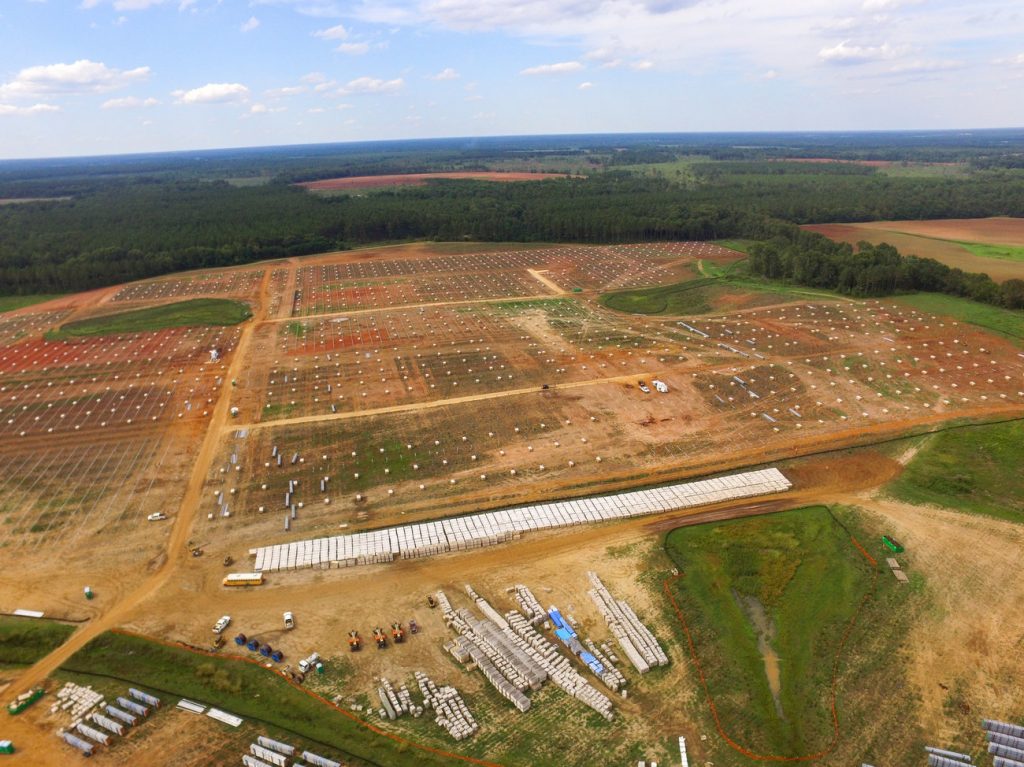 An aerial view of the construction site for Silicon Ranch’s new solar farm. The company is building around existing ponds and wetlands and will keep a vegetative barrier so that the solar panels will not be visible from the road.
Ron Vuocolo/Silicon Ranch

Absent from the discussion with Silicon Ranch was any mention of climate change. It wouldn’t have swayed him anyway.

“The world’s not coming to an end next week because of climate change,” Singletary says. “I’m just skeptical of the whole thing. To me, it’s played up way more than the effect it’s actually having.”

Had there been a golden opportunity to sell a piece of his land for a nuclear plant or a coal plant, Singletary says he probably would have taken that, too.

The transformation of his farm is happening quickly. The last crops were harvested in the fall of 2018, and several months later, construction crews moved in and began preparing the land for what will be 355,124 solar panels, shipped from Hanwha Q Cells in Dalton. The plan is to send power to the grid by the end of 2019. Already, steel posts rise from the ground in neat rows, and giant cardboard boxes holding stacks of solar panels dot the landscape.

Nick de Vries, vice president of technology and asset management for Silicon Ranch, says one of the beauties of solar is how fast it can all come together.

“You can build a large power plant … within a year,” he says. “Year over year, as we’ve matured, as we’ve industrialized, we are now able to deliver energy at very competitive prices.”

It also helps to have supply lines close by. De Vries, who worked on his first solar project in Georgia in 2013, says they used to ship materials from elsewhere in the country. That has changed with the opening of the Dalton assembly plant, among other suppliers that have cropped up in recent years.

“Now we can source more and more of the different parts that go into this construction locally — either from within the state or surrounding states. This shortens our lead times,” he says. “That’s important for business.” 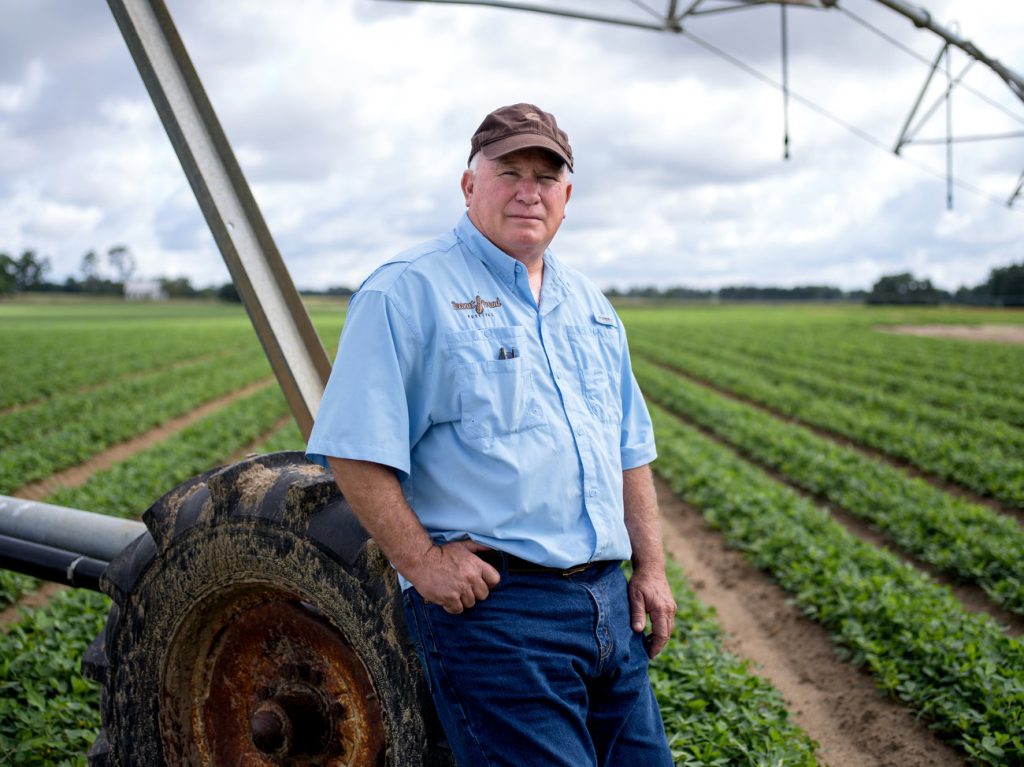 Mike Newberry stands next to the center pivot irrigation system that waters his peanut crop. A fourth-generation farmer, he is the last in his family to farm. His only child, a daughter, has a career as a physical therapist. Johnathon Kelso for NPR

This project is bringing badly needed tax revenue to Early County, where the poverty rate is about 27%. June Merritt, chair of the Early County Board of Commissioners, estimates that $8 million will come into the county in the form of taxes over the next 25 years, which is a tremendous relief, she says. Of that, $5 million will go to the school system. Additionally, Silicon Ranch is providing college scholarships for students who want to pursue a career in the solar industry.

“There’s no downside. I don’t see how it could be,” Merritt says. “We don’t have pollution. We don’t have smell. You know, there’s just nothing. They’re just there.”

Mike Newberry is chair of the Early County Development Authority and a peanut farmer himself. And like Steve Singletary, he says people in the area don’t really think about where their electricity comes from.

He couldn’t care less, he says, laughing: “I want it the cheapest.”

At the same time, Newberry sees the new opportunities as encouraging. “There are people in industries who want [solar]. And if we can help them get their need, then it’s mighty good for us,” he says.

In neighboring Clay County, Newberry’s childhood friend Will Harris is convinced that turning farmland over to solar production doesn’t mean you have to take it out of agriculture entirely. 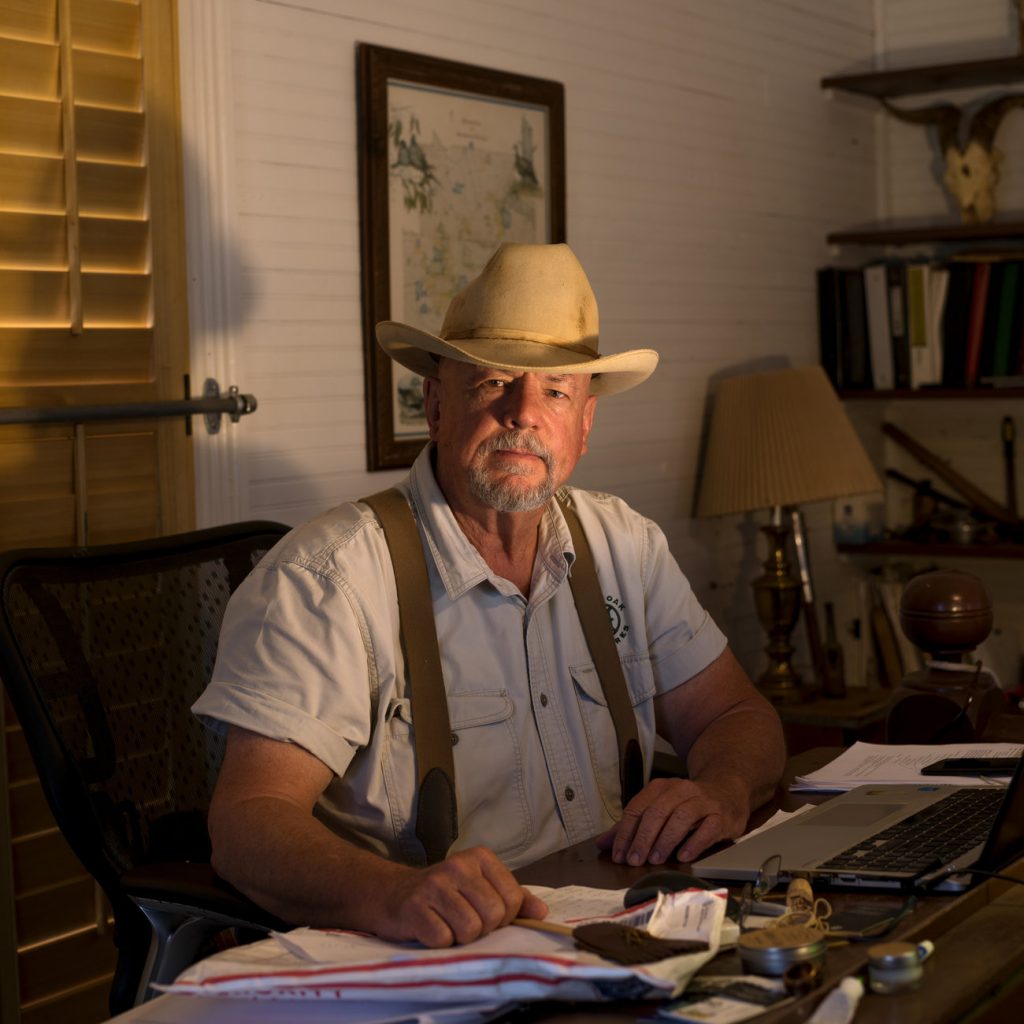 Will Harris, a fourth-generation cattleman and the owner of White Oak Pastures, sits in his office in downtown Bluffton, Ga. In earlier times, Harris sold fertilizers and pesticides. Today, he practices regenerative land management, restoring cycles of nature to land degraded by industrialized processes. Johnathon Kelso for NPR

Harris is also the rare farmer in the area who believes agriculture, solar and sustainability can go hand in hand. For the past two decades, Harris has been practicing regenerative land management on his farm, White Oak Pastures, which has been in his family since 1866.

When he learned about what Silicon Ranch was doing next door, he had an idea. The company would need to hire someone to take care of the land that they’d just purchased. Why not him, using regenerative farming techniques?

“We look for symbiotic relationships and this is one of them,” Harris explains. “You’ve got Silicon Ranch, who are wonderful technology people, who have figured out how to capture energy from the sun and put it through a wire. Those engineers, by their own admission, are not good land stewards.”

“Above those panels is their expertise. Below the surface of the soil is ours,” Harris says.

Harris and Silicon Ranch are putting together a plan to rotate animal species around the solar farm, possibly cattle and sheep. The animals would graze on grass and weeds and naturally fertilize the land with their manure. In between grazing periods, the land would have time to recover. Grazing in this way could prevent erosion and, down the road, potentially sequester carbon in the soil, as Harris has achieved on his own land. But it could take years.

“When they give us access to the land, it’s going to be really depleted,” Harris says. “We don’t know how much carrying capacity it’s got for a while. We don’t know what to expect down there.” 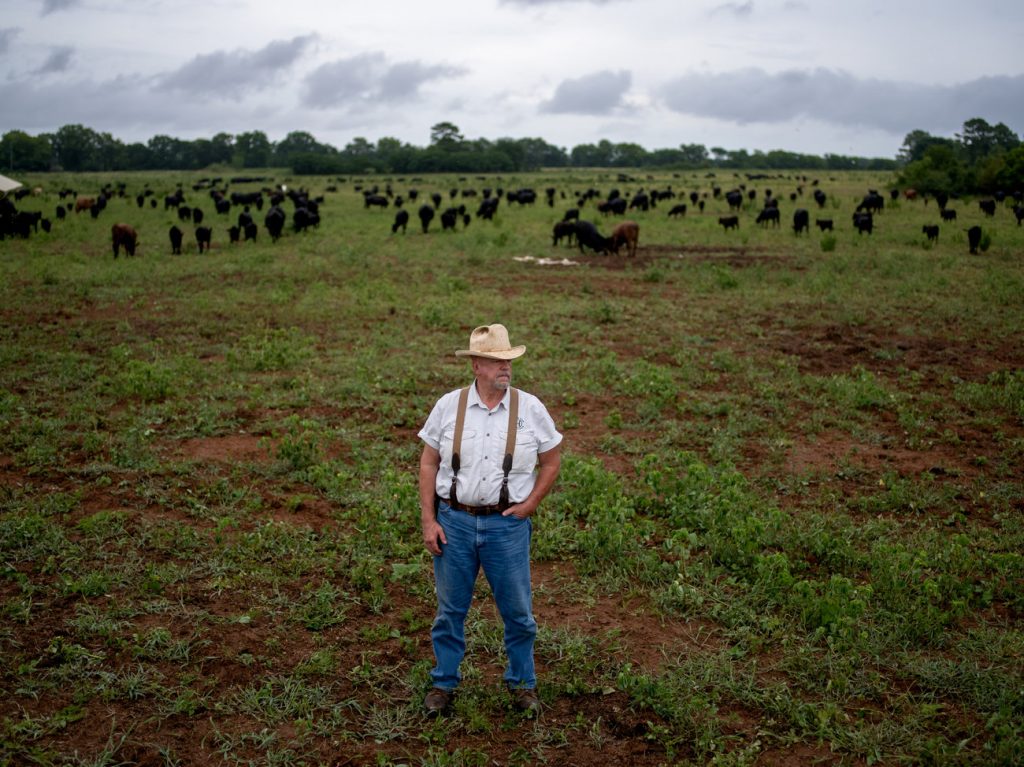 Will Harris stops to check on a herd of cattle on his farm, White Oak Pastures. The consulting firm Quantis conducted a carbon footprint evaluation of the farm and found its pastures could be capturing more carbon than its cows are emitting. When grass is allowed to grow on the pastures, it puts down deep roots, storing carbon in the soil that it draws out of the atmosphere. Johnathon Kelso for NPR

For now, the construction site remains dusty and dry. A water truck makes the rounds, spraying the ground with water to keep clouds of dirt from enveloping the workers when construction equipment rolls by.

Come back in six months, says Nick de Vries, and this place will be transformed.

“You will see a sea of glass, silicon and steel,” he says, looking out over this sunny, southwest Georgia landscape.

And soon after, if Will Harris has his way, acre after acre of healthy pasture, a sign of an ecosystem restored.