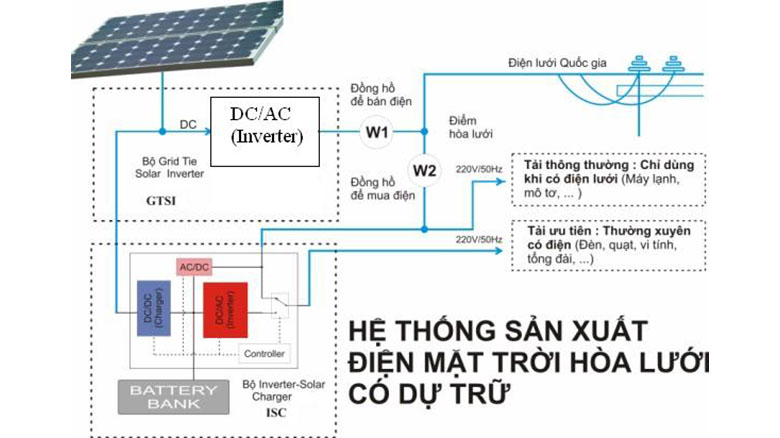 Ready to cut the ties and go off-grid?

Have you considered going completely energy independent with a solar power system?  That is, do you long for going off-grid, free from the expensive rates of utility companies?  I had always thought that off-grid was clearly the way to go, until I did a bit more research.

With an on-grid battery system, a back-up battery is included as part of the solar power system.  Batteries can store excess energy generated by the solar panels, and even send the surplus electricity out to the grid.  Of course, the system is connected to the electricity grid which is why it is called “on-grid.”  The solar panel system includes solar panels, a charge controller, battery, inverter, AC service entrance and AC subpanel, and a utility meter.

You can still stay on-grid without a battery, however.  These solar power systems are the simplest and least expensive to set up.  All that is included is the PV array, an inverter, AC service entrance and utility meter.  Your system is connected to the grid, but there is no battery back-up.  The obvious drawback is that when power goes out in your area, your solar power system will also shut down.

Finally, there is the off-grid solar power system.  There is no tie-in to the electricity grid.  Batteries are required as part of the system in order to store excess energy.

If your home is in the woods, you may need to be off-grid

Turning to a comparison of on-grid vs. off-grid solar power systems, there are clear advantages and disadvantages to each of these.

Off-grid systems are the only way to go if you live in a remote area where there are no utilities.  In fact, you can get a better deal on rural properties that are not connected to the grid because of the expense of running lines out to the home.

But, if you have the ability to connect to the grid, why wouldn’t you?  First and foremost is the idea of independence from utilities.  No more worries about rate increases.  If the power goes out, your lights and refrigerator (and television and radio) are not affected.  Second, due to the cost of an off-grid system, many homeowners find themselves forced to conserve energy rather than expand the system to generate more power.  This is very appealing to the environmentally-minded.

What are the down-sides for going off-grid?  Instead of the utility company maintaining your system, you’ll be doing it all yourself.  Batteries will have to be replaced (about every 5-15 years) at a cost of at least $1000.  In addition to the cost of the batteries is the inefficiency, which increases as the batteries age.  They start out at about 90% efficiency.  Moreover, when you’re not connected to the grid, excess energy that is generated is not fed out to the utility to give you an energy credit (this can happen with on-grid systems).  Off-grid systems must use the surplus or lose it.  Finally, most off-grid systems include a back-up generator, which can be very expensive.

None of this is to say that you should not go off-grid.  My in-laws have been living off-grid for almost 25 years and just love it!  My father-in-law is very much a do-it-yourself kind of person.  If you enjoy convenience, however, going off-grid may not be for you!