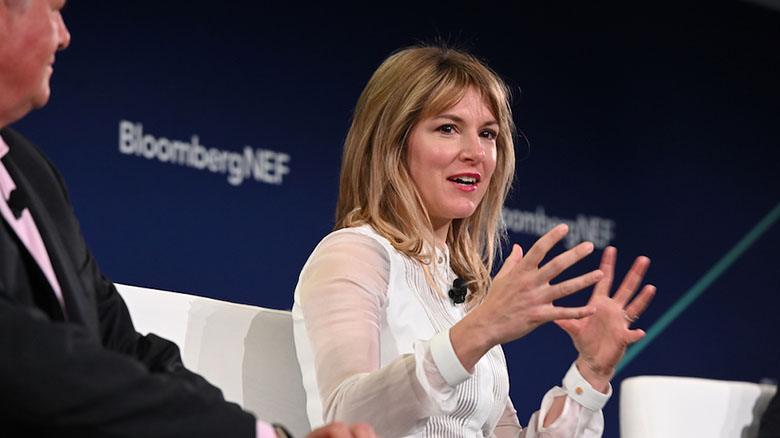 Sunrun made a splash at the BNEF Summit in New York City at a time when utilities are increasingly struggling to adapt to new realities.

But distributed energy resources have a long way to go to play a major role, and we will still need additional energy sources in future power systems.

Of all the energy conferences held in the United States, there is no one that is quite like BNEF Future of Energy (rebranded BNEF Summit in New York) held every year in Midtown Manhattan. Solar Power International has more attendees, and CERAWeek has a bigger presence of oil and gas executives. But for a high-level, visionary look at where electricity and other forms of energy are headed, this is the place to be.

The opening day of the 2019 conference did not disappoint. Unlike the previous two years there were no leading figures with the Trump Administration, no Myron Ebell or Rick Perry, and no Bob Murray making claims about how transitioning off of coal will cause grandma to freeze. But a constant was the presence of some of the best minds in the industry on energy matters, including CEOs of some of the largest power companies in the United States and globally.

And this year more than previous years, a recurring theme is the threat that utilities and the utility business model face. The summit comes as regulators in California are openly discussing breaking up a bankrupt Pacific Gas & Electric Company (PG&E), including potential municipal takeovers. And in Puerto Rico, the island’s public utility is considering a new plan to break the island’s grid into “mini-grids”, which still may not satisfy the island’s need for consistent power during disasters.

The threat also comes from distributed solar, batteries and microgrids, which have particular advantages over centralized generation, including reducing the need for transmission and distribution infrastructure, as well as the ability to provide more reliable power during disasters.

The threat of rooftop solar

This year Sunrun CEO Lynn Jurich was up on the plenary stage along with the utility executives, providing a very different vision of the future. Jurich notes that more and more of the company’s residential customers are choosing solar plus battery storage. And while the number that she offered for a future levelized electricity costs from distributed solar and storage – 10 cents per kilowatt-hour within five years – is highly optimistic, the central logic Jurich offered is unassailable.

“The price to deliver that power (from centralized generation) is getting more expensive, and the cost of distributed energy resources is getting cheaper,” stated Jurich during a session on costs of generation, flexibility and capacity. “The cost curve is going to get there. Lets’ get there faster.”

But while the direction of these economics is strongly in favor of a future of rooftop solar and battery storage, Jurich noted that this is part of a larger transformation. “If we are going to actually decarbonize, this is a local thing,” explained Jurich. “This is people’s behavior. it is local decisions that are going to help us decarbonize.”

And ultimately, this is about a transformation of the built environment. “Solar and storage is a beach head into that home,” says Jurich, noting that rooftop solar and batteries can lead towards an environment that includes EV charging, intelligent demand response and other services.

The irony of Sunrun’s argument about generation at the point of demand is that rooftop and other forms of on-site solar have much more ability to do this for offices and factories than homes. Most Americans work during the day, and such their rooftop solar is not mostly meeting their power demand during the week – it is meeting the demand of their neighborhood, and/or the businesses down the street.

And yet the commercial and industrial sector in the United States has seen neither the sustained growth of residential solar, nor the volumes deployed that utility-scale has. There are additional challenges in this sector, and it is not clear that current policies in most states effectively incentivize businesses to actually generate at the point of demand.

However, this is not to say that a PV system on someone’s home meeting demand down the street does not have advantages over large, centralized generation, in terms of less investment in lines and wires and greater resiliency. And this is something that large utilities are still struggling with.

Duke Energy, as always, was eager to try to present itself as a visionary utility leading the way to the future. But it’s hard to see the company’s strategy of attempting to run its nuclear plants for unprecedented lifetimes while slow-walking the transition to renewable energy as progressive.

But that does not mean that Duke is not experimenting with distributed energy and non-wires alternatives. Duke CEO Lynn Good noted that in trying to get more power to meet the booming population of Asheville, North Carolina, the company is deploying a combination of gas generation, transmission upgrades, some solar, and demand response.

Minus the gas, this is very similar to what California has been doing for years in terms of the state’s approach to replacing older fossil fuel plants. But Good’s description of the difficulties that the company has had in signing up customers underscores the fact that utilities have consistently not been able to compete with private companies in supplying distributed energy solutions.

Duke is a monopoly utility which has generally fought rooftop solar tooth and nail, and herein may lie the problem: an outdated utility business structure based on Cost of Service Regulation.

Jurich’s optimism about the potential role of distributed generation in decarbonizing the electric sector stands in sharp contrast to the actual state of solar generation in the United States. According to pv magazine’s analysis of data from the U.S. Department of Energy, solar met only 2.4% of U.S. electric demand in 2018, and PV plants smaller than 1 MW were only 1/3 of that – or less than 1% of all U.S. electricity.

And while Sunrun has been more aggressive and successful in its growth than any other company in the rooftop solar sector, even under the best-case scenario it will take time for rooftop solar to scale.

There are also physical limitations here, including the raw kilowatt-hours needed. A 2016 study by the U.S. Department of Energy’s National Renewable Energy Laboratory (NREL) found that the technical potential of all the rooftops in the United States, if loaded with solar, was only 39% of current U.S. electric demand. And since technical potential is an upper limit that will not be approached, rooftop solar will only ever be a portion of that number.

Furthermore, power demand is set to increase with the electrification of transportation and heat, moving the goalposts farther.

The deployment of solar windows and parking canopy solar could add to the portion met with on-site generation, but at the end of the day other energy sources will be needed. This includes wind, as many studies have found that the most practical way to decarbonize with renewables is to deploy a mix of wind and solar along with batteries, particularly to meet demand during the winter months in northern latitudes.