Structure and principle of Solar panel 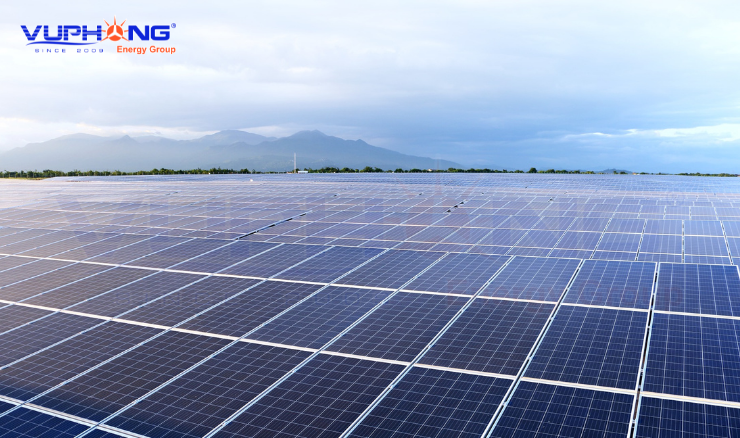 This article will help you more about the elements, the material that makes solar panels, and the basic diagram of the energy-to-power conversion process.

What is solar panel?

A solar panel (or photovoltaic panel) is a device that converts sunlight into energy using the photoelectric effect. They are an essential part of a solar power plant. They are particularly well suited to regions where grid energy is difficult to get, such as high mountains and distant islands, as well as space operations such as satellites circling the earth, portable computers, distant telephones, water pumping equipment, etc. 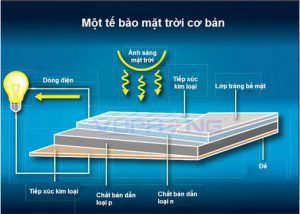 The setting of solar power will ensure that technology will provide safety for the user.

Configure and the work of the solar panel.

The solar panel consists of many electrical cells (solar cells), which are the semiconductor component and contain purely separated silicon. The surface has several sensors for lighting, which convert sunshine energy into electricity. These electrical cells are shielded in the front by the glass and the rear by a plastic substance. It’s all packed together in the vacuum created by the polymer. The solar panel’s power surge or electric power is altered based on the quantity of light that shone on it. Solar panels are made by re-clothing electrical cells (normal 60 or 72 cells on a solar panel). 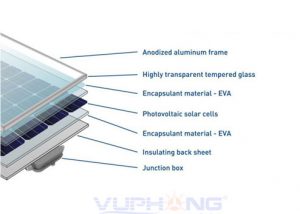 The detailed layers of Solar Panel

The majority of solar materials are silic crystals, which are classified into three types:

The structure of solar panel

The top technology is the topography, in other words, the various levels of 300-year-old 956; m to create a module.

The inside of Solar Cell

As previously said, the basic elements and function of absorbing the light of solar lights and converting it into electricity are the electrical cells. Depending on the manufacturing method of the solar panel, these silica crystals might be single or numerous crystals. The key technical characteristics include size, color, cell counts, cellular cells, and, most critically, the sun’s shift. At the stage of metabolizing roughly 17.6 percent, the most common cells, known as poly cells, generated a 250W solar panel with 60 cells. These cells are connected by a thin copper sheet coated in a tin alloy.

The protect glass of the solar panels.

It is the heaviest part of the solar panel to protect and maintain endurance to the entire solar panel. The thickness of this glass is usually 3,3mm, but it can use between 2mm to 4mm depending on the type of enhanced solar system. The essential factor that needs to focus on is hardship, the spectrometer. The background of the solar panels.

The solar battery cover was designed to serve a useful purpose by shielding and protecting the PV cells from the elements and humidity. Different businesses’ batteries might range in thickness, color, and the existence of certain things to cover up better or for a higher degree of strength.

The package that completes the solar panel

One of the most important materials is the package– the bindings between the various layers of the solar panels. The most popular material used as a package is EVA– Ethylene vinacetate. It must be cut into a sheet and lie first and behind the electric cells. When you take a thermostat of the vacuum, this particular polymer became glue again throughout and associated with electrical cells.

The frame was one of the last sections to be created by the solar battery. It is often constructed of aluminum and serves as a function of long-term tolerance.

In some specific cases, there are panels without a frame or a customized plastic solution. These solutions are frequently linked to the usage of back-of-glass support technologies.

The unit has enough power to send the electrical connection to the solar module. It includes a cable that connects the system’s panels. When choosing to package, we should consider the plastic’s quality as well as the density of the connection.

Above the detail of the structure of solar panels, we will find out about the solar power grid.

A prototype of the solar panel system

The solar panels are a huge number of diod-n, and when exposed to sunlight, we can generate electricity. A photoelectric effect is a name given to this process. 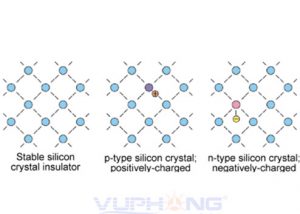 The history of photovoltaic effect.

The photoelectric effect was first discovered in 1839 by French physicist Alexandre Edmond Becquerel. However, Charles Fritts invented a new solar cell in 1883. To construct the junction, he covered the selenium semiconductor circuit with a thin coating of gold. The device is barely 1% efficient, and Russell Ohl is credited with inventing the first solar cell in 1946. Sven Ason Berglund devised a way to improve the battery’s ability to sense sunlight.

Check detailed information of our service for comercial & industrial

Silicon belongs to group IV, which means it has 4 electrons in the outermost shell. Silicon can combine with other silicon to form solids. There are two types of silicon solids, polymorphs (no arrangement order) and crystalline (atoms arranged in 3D spatial order). The most common solar cells use polycrystalline silicon.

Silicon is a semiconductor. Solid silicon, at a certain energy level, electrons can reach, and some other energy levels cannot. These disallowed energy layers are considered empty. This theory is based on the idea of quantum mechanics.

Pure silicon is a poor conductor of electricity at ambient temperature. The explanation is unsatisfactory in quantum physics at the Fermi energy level in the void. To make silicon more conductive, small electrons from group III or V atoms can be introduced to the periodic table. Like silicon, these atoms occupy the silicon atom’s location in the crystal lattice and are connected with surrounding silicon atoms. On the other hand, Group III molecules have three outermost electrons, whereas group V atoms have five. There are spots in the crystal lattice where there are too many electrons and regions where there aren’t enough. As a result, electrons having excess or a lack of electrons (referred to as holes) do not participate in lattice connections. They have complete freedom of movement within the crystal. Silicon associated with group III atoms (aluminum or gallium) is a p-type semiconductor because the energy is predominantly positive. In contrast, silicon is associated with group V atoms (phosphorus, arsenic) as an n-type semiconductor. It is important to note that both the n-type and the p-type are energy neutral, which means they have the same positive and negative points. The n-type semiconductor, the harmful kind, can move about, and the p-type can do the same.

The operation principle of solar cells: Conversion of photovoltaic light into electricity

Light energy is converted into direct electricity by solar panels (DC). The DC is then transformed to alternating current using an inverter device equipped with an MPPT (Maximum Power Point Tracking) algorithm (AC). The alternating current power generated by the solar panel system will be linked to the main electrical cabinet, synced with the existing power grid, and used in parallel with the grid (priority will be given to solar power). If there is a shortfall, it will be automatically withdrawn from the grid; if there is a surplus, it will be returned to the grid) to assist in reducing grid power use. This is also the basic idea of connecting to the solar grid.

When there is a power outage, the system’s inverter automatically disconnects from the grid. This assures that the solar battery system does not generate power for the grid, endangered for employees. 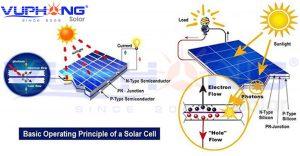 Diagram of the solar cell principle

When a photon collides with a piece of silicon, one of two things happens:

When the photon is absorbed, its energy is transferred to the electrons in the crystal film. Usually, these electrons are in the outermost shell and are often bound to neighbor atoms not to travel far. When electrons are excited, becoming conductive, these electrons can freely move in the semiconductor. Then the atom will lack 1 electron, and that is called a “hole.” This hole allows the electrons of the neighboring atom to move to fill the “hole,” which creates a hole for the adjacent atom with the “hole.” And so on, the “hole” moves through the semiconductor circuit.

Click here for further information about the innovation of solar panel

Hopefully, the above knowledge will help answer all your questions about the composition and principle diagram of solar cells. High-quality solar panels provided by Vu Phong Energy Group are warranted for 10-25 years, lifespan is over 50 years, quality meets European standards, performance warranty after 25 years is over 80% – 90 %. Products have many power levels from 3W to 400W with different sizes.