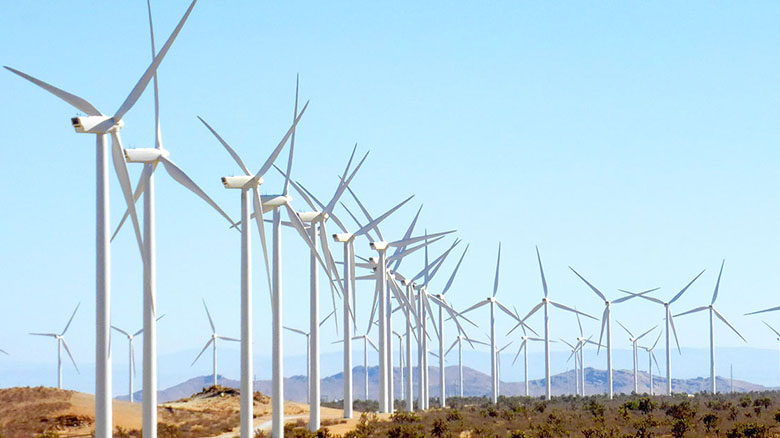 The total global wind power capacity has reached 837 GW by the end of 2021, according to the Global Wind Power Report 2022. Wind power is on positive growth, with many large-scale projects invested in and installed. Before saying “hi” to new projects, let’s join Vu Phong Energy Group in “visiting” the world’s largest operational wind farm.

China has the most installed wind power capacity in the world and is home to the world’s largest wind farm, the Gansu Wind Farm or the Jiuquan Wind Power Base. This complex now has a capacity of 10 GW, with a planned capacity of 20GW. It has 7,000 turbines installed in many Chinese provinces, including Gansu, Hebei, Shandong, and Jiangsu… The project was approved in 2009, and the first phase was completed in November 2010 with 5.16 GW – the equivalent of 3,500 wind turbines. Gansu wind farm had the capacity of 6 GW in 2012 was similar to the whole wind power capacity of the UK at the time. Gansu Wind Farm will officially attain the 10 GW milestone in June 2021.

The project, which has a total capacity of 1,600 MW, is a wind farm complex located in Rajasthan’s Jaisalmer area. This’s the world’s second-biggest operational wind farm and the largest wind farm in India.

There is also a Muppandal wind farm with a total capacity of 1,500 MW in India, which includes a group of wind power plants in Kanyakumari district, Tamil Nadu state. The Tamilnadu Energy Development Agency (TEDA) developed the project. The farm employs many turbines with capacities ranging from 200 to 1,650 kW. The Muppandal wind farm, in particular, has the oldest turbines in the country due to its development in 1986.

With a total installed capacity of almost 1,550 MW, the Alta Wind Energy Centre also referred to as the Mojave Wind Farm, is the world’s third-biggest onshore wind energy project and the largest onshore wind farm in the Americas. The project, which spanned the years 2010 to 2014, included the construction of 11 wind farm facilities (from Alta I to XI) over a total area of 130 km2.

Two largest offshore wind farms in the world: Hornsea One and Hornsea Two

Before Hornsea Two, the world’s largest offshore wind farm, Hornsea One, with a capacity of 1.2 GW, held the record. It was also the first offshore wind farm in the world to surpass 1 GW in capacity. Located off the Yorkshire coast, it covers 407 square kilometers and encompasses 174 Siemens turbines, each with an individual capacity of 7 MW. It was generated in February 2019.

A large offshore wind farm is also under construction in the United Kingdom. The Dogger Bank Wind Farm, with a total capacity of 3.6 GW, is located off the east coast of the North Sea. The project, divided into three phases of 1.2 GW each, is expected to become the world’s largest offshore wind farm when completed in 2026. Dogger Bank employs GE Renewable Energy’s Haliade-X turbines. This is the world’s most powerful turbine model. According to the original design, the Haliade-X turbine has a capacity of 12 MW. Haliade-X was then upgraded to 13 MW and 14 MW for the Dogger Bank project usage. Phases 1-2 use a turbine with a capacity of 13 MW, while phase 3 uses 14 MW turbines.