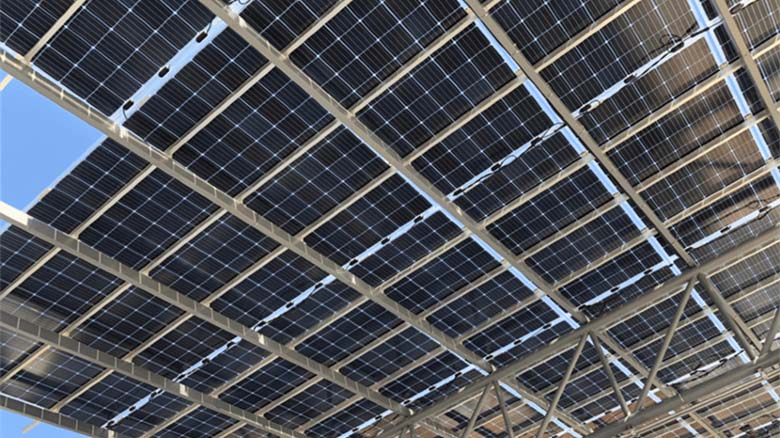 New research suggests that double-sided solar panels that can tilt to follow the Sun across the sky could massively improve efficiency and energy yield.

Using solar power to relieve the strain on fossil fuels, if not outright replacing them, is vitally important. The difficulty that exists with solar technology is making it as efficient and cost-effective as possible.

New research from the Solar Energy Research Institute of Singapore, published in the journal Joule, suggests that a combination of techniques could be the key to viable solar power.

The team, led by research fellow and first author Carlos Rodríguez-Galle, combined double-sided  (bifacial)  solar panels, which can collect sunlight on two sides rather than one, with an axial system to allow the panels to track the Sun’s movements.

The researchers found that when pitting their combined system against more traditional single static solar panel arrangements, their novel technology was capable of generating around 35% more energy. The system also proved to be cost-effective too, reducing the cost of electricity by an average of 16%.

Efficiency the Key to a Solar-Powered Future

A multitude of companies such as Energy Sage exist solely to assist consumers in selecting the most efficient and economical solar panels for their energy needs.

These efficiency measurements strongly rely on the status of the solar cells within the solar panel. Their chemical composition and electrical configuration all determine how well they convert solar energy to electrical energy.Research into solar panel efficiency has also concentrated on improving the performance of solar cells. This includes inspiring work in 2019 by researchers from the University of Manchester that focused on removing material defects in silicon that could be responsible for a 2% drop in efficiency.

This may seem like a minor improvement but across the solar farms currently in operation around the globe, it is equal to more energy than can be generated by all of the UK’s nuclear power plants combined. The fact that such a minor improvement could yield such a vast amount of power puts the 35% increase in efficiency into perspective.

Double-sided solar panels can be placed in areas of the same size as single-paneled units while simultaneously producing an increased amount of energy per unit area.

The main improvement suggested by the team is the solar panel’s ability to pivot and track the Sun as it moves through the sky during the day, therefore capturing more light. These developments can be combined down the line with improved solar cells, further improving efficiency.

Staring at the Sun – Soaking up Energy for Longer Periods

To perform their study on the efficiency of their innovative solar panel design, the team collected data from NASA’s Clouds and the Earth’s Radiant Energy System (CERES) satellite, designed to calculate Earth’s radiation budget — the balance between the radiation Earth receives and reflects.

This allowed them to calculate the total amount of radiation received by Earth’s surface each day, and then tailor this information to determine the effect the Sun’s position has on the amount of radiation a solar panel can receive. They were also able to look at the impact the panel’s orientation has on this value. With this information, the researchers could finally estimate the cost of generating electricity.

The researchers say their results indicate that their double-sided Sun tracking solar panel delivered stable results even when adverse weather conditions were factored into their models. The model also suggests that, even though the technology could be beneficial across the globe, the real benefit of the system would be when they are deployed in proximity to the poles.

The Challenges of a Double-Sided Solar Panel

There are still hurdles for the system to overcome. For example, the team’s research models concentrated on the system being employed in large solar power farms. The team faces the challenge of seeing if the system can be scaled down and still be cost-effective.

Like any technological advancement, the double-sided tracking panel technology must also prove itself over existing technology. Single-panel Sun tracking panels already exist, and the double system is more expensive to manufacture. Despite this, the team is confident the benefits of the system will win over the traditionally conservative solar power market.

The next step in the team’s research involves replacing the standard silicon-based solar cells used in the modeling phase with more advanced solar materials that deliver greater efficiency but at a much higher price.

Fortunately, manufacturing costs associated with solar technology is in an almost constant decline, meaning that the system the team proposes could be commercialized in the near future.