The highlight number of carbon pricing 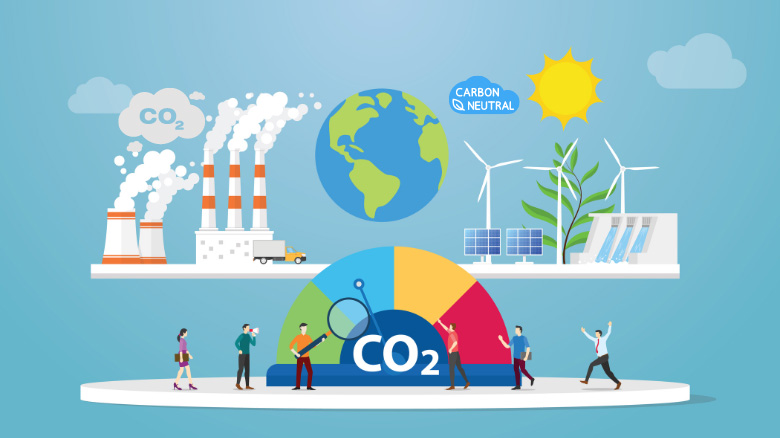 Here is some interesting carbon pricing information, updated with data from the World Bank’s “State and Trends of Carbon Pricing 2022” report.

Global carbon pricing revenue in 2021 established a record of over USD84 billion, an increase of approximately USD 31 billion over 2020 – an increase of almost 60%. Higher carbon prices drove revenue growth, particularly in the European Union Emissions Trading System (EU-ETS), which accounts for around 41% of total global carbon pricing revenue, and the New Zealand ETS and the California Cap-and-Trade Program. Prices in carbon taxes and ETS have reached new records in many jurisdictions, driven by ambitious climate policies and economic factors such as energy prices.

In particular, revenue from ETS surpassed revenue from carbon taxes for the first time in 2021, accounting for 67 percent of total global carbon pricing revenue. It demonstrates a rapid growth in the value and share of ETS. ETS revenue accounted for 26 percent of total carbon pricing revenue in 2016, increasing to 34 percent in 2017, 47 percent in 2018-2019, and equivalent share to a carbon tax (reaching 49 percent) in 2020.

Carbon credits based on emissions reductions (such as carbon capture and afforestation) price USD 19/credit as of March 2022, a 48 percent increase over the previous six months. Emissions reduction or avoidance credits are less expensive, costing just around 40% of this price.

The significant increase in carbon pricing revenue demonstrates the tool’s potential for development. It also highlights the significance of carbon pricing as a financial instrument to help achieve larger policy objectives, such as post-pandemic recovery, assisting vulnerable sectors and communities in adapting to climate impacts, and achieving just transitions.

However, the carbon price remains far below the amount necessary to reach the Paris Agreement’s climate targets. Carbon prices must be in the USD 50-100/ton range to keep the average global temperature increase below 2 degrees Celsius. Meanwhile, to reach net-zero emissions by 2050 – the milestone for limiting global temperature rise to 1.5 degrees Celsius – it is estimated that the carbon price needed is in the range of USD 50-250/ton, with the average being USD 100/ton.

There are 68 CPIs operating throughout the globe as of April 2022, with three more planned. Carbon pricing accounts for around 23% of total global greenhouse gas emissions.

In the past year (May 2021 to May 2022), a new carbon tax (in Uruguay) and three new ETSs (in Oregon, New Brunswick, and Ontario) have been operated. Carbon pricing instruments are also scheduled for implementation in Indonesia, Austria, and Washington (USA). Other nations and regions, such as Israel, Malaysia, and Botswana, have announced their intention to develop carbon pricing, while Vietnam has outlined a plan to set up an ETS. Several additional jurisdictions in Africa, Central Europe, and Asia are also evaluating the potential of implementing carbon pricing. 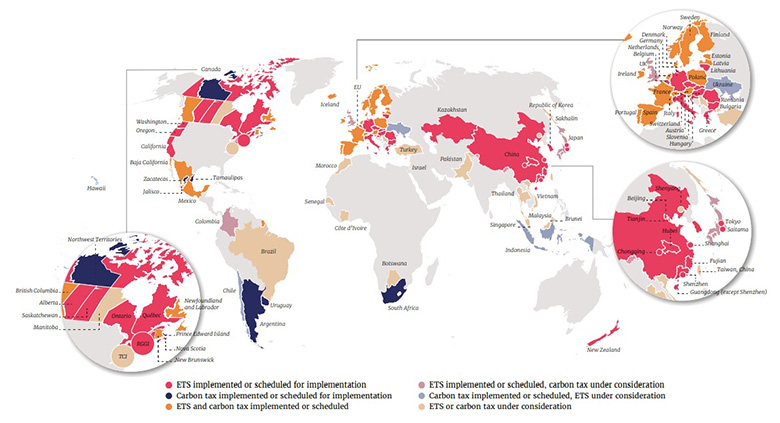 In 2021, the carbon credit markets increased by 48%. For the first time, the total value of the voluntary carbon market surpassed one billion USD (November 2021). The volume of carbon credits traded on the voluntary market exceeded 362 million credits, representing a more than 92 percent increase over 2020. The main driver of the voluntary carbon market is corporate environmental goals, as corporations commit to decarbonizing the value chain and achieving net-zero emissions. The Glasgow Financial Alliance for Net Zero (GFANZ), which includes over 450 banks, insurers, and investors worldwide committed to addressing climate change in their operations, reinforces this trend.

Internal carbon pricing is reported to be USD 0.8-6,000/ton, but most of it remains below $50-100/ton – the economists believe the price is needed to meet the Paris Agreement’s goals. Approximately 950 companies have disclosed their internal carbon pricing to CDPs, with 68 percent charging USD 50/ton or less and 18 percent charging USD 50-100/ton. Less than 100 companies charge more than USD 100 per ton.