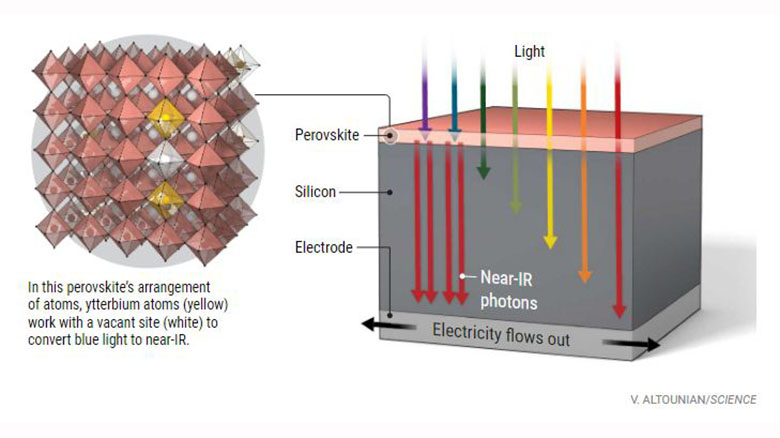 In theory, such tandem cells should deliver a double dose of power, with electricity coming from both layers. But building two complete solar cells, one atop the other, adds cost and other challenges. Last week, a team reported advancing a potentially simpler, cheaper way to make a tandem.

The team’s perovskite converts light instead of generating current, transforming blue photons to near-infrared (near-IR) photons, which the silicon cell below then turns into electricity. The researchers say the design could boost the efficiency of silicon solar cells by nearly 20%. If it does, it could be key to realizing the promise of perovskites, a class of compounds that share a crystal structure and are made from common elements such as lead, bromine, and chlorine.

“This is one of the most exciting results I’ve seen in a long time,” says Michael McGehee, a perovskite expert at Stanford University in Palo Alto, California. “The boost in efficiency they are claiming is very significant.” Silicon solar cell–makers, a $30 billion a year industry in 2016, grasp at every tenth of a percentage point gain in efficiency.

Silicon dominates the solar industry not because it’s the best solar converter, but because it’s serviceable and relatively cheap. Still, manufacturers must use expensive clean rooms to purify and prepare it. Perovskites, in contrast, are easy to coax into a thin, powerfully light-absorbing layer. Most perovskites are best at absorbing blue light, so they must be paired with other materials to snag the full solar spectrum.

The solar industry is racing to commercialize perovskites by placing them atop conventional silicon modules, which discard much of the energy in bluer light photons, releasing it as heat rather than electric current. But in addition to the expense of adding device layers, manufacturers must also grapple with practical challenges such as designing tandems so the amount of current coming out of each cell is the same. If they don’t, the overall current is limited by the weaker of the two cells.

A new tandem solar cell design uses a perovskite layer (pink), which absorbs energy from blue and purple photons and re-emits it as near-infrared (near-IR) photons. Along with other colors of light, these photons are absorbed by a silicon (gray) solar cell and converted to electricity.

Two years ago, researchers led by electrical engineer Hongwei Song at Jilin University in Changchun, China, reported a way around these challenges. By sprinkling a small amount of the rare earth metal ytterbium into a standard cesium- and lead-based perovskite, they found they could build a perovskite tandem with a different, simpler architecture. Like conventional perovskites, the ytterbium-doped version absorbs blue photons, energizing electrons in the material. But these electrons aren’t turned into current. Instead, they immediately pass their energy to the ytterbium atoms, which re-emit virtually all of it as near-IR light. Most of these photons zip into the silicon cell below, which absorbs nearly all their energy and efficiently converts it to electricity, losing very little as heat. “For solar energy conversion, this combination of materials is almost exactly what you want,” says Daniel Gamelin, a chemist at the University of Washington in Seattle.

The perovskites Song’s team created were nanoparticles, however, which are hard to lay down uniformly on a silicon cell. The challenge is acute with the best-performing commercial cells, in which silicon is topped with a protective layer of glass that is intentionally roughened. The miniature glass mountains help light enter the cell instead of reflecting off its top surface, but the perovskite nanoparticles don’t always form an even layer on the rough surface.

At last week’s American Chemical Society meeting here, Gamelin reported that he and his colleagues have solved this problem. They used a common solar cell–growing technique known as vacuum deposition to create thin, smooth layers of ytterbium-doped perovskite on roughly 14-centimeter silicon solar cells. The technique coats the miniature glass mountain range with an even perovskite film.

In the resulting tandem, nearly all the blue light absorbed by the perovskite is converted to near-IR photons, Gamelin reported. As a result, he predicts, topping a high-end silicon cell with the ytterbium perovskite should enable it to convert 32.2% of the energy it absorbs as sunlight into electricity, up from 27%—a 19.2% boost. Gamelin’s team is doing experiments now to confirm those predictions. “I am a little skeptical of the numbers,” McGehee says. But even a fraction of that increase “would be a big deal,” he says.

Michael Graetzel, a photovoltaic expert at the Swiss Federal Institute of Technology in Lausanne, agrees. But he says practical concerns such as emitted near-IR photons escaping may limit gains to less than 10%.

Last month, Gamelin and his colleagues launched a startup, BlueDot, to commercialize the technology. They have plenty of competition. Perovskite startups such as Oxford PV in the United Kingdom and Saule Technologies in Warsaw are already field testing their perovskite-silicon tandems or preparing to do so. But BlueDot hopes to leapfrog the other companies, because its simpler tandem design should enable standard silicon solar cell manufacturers to integrate perovskites into their manufacturing lines more easily—and get perovskites onto the roofs of the world.