Solar-Panel Roads to Be Built on Four Continents Next Year 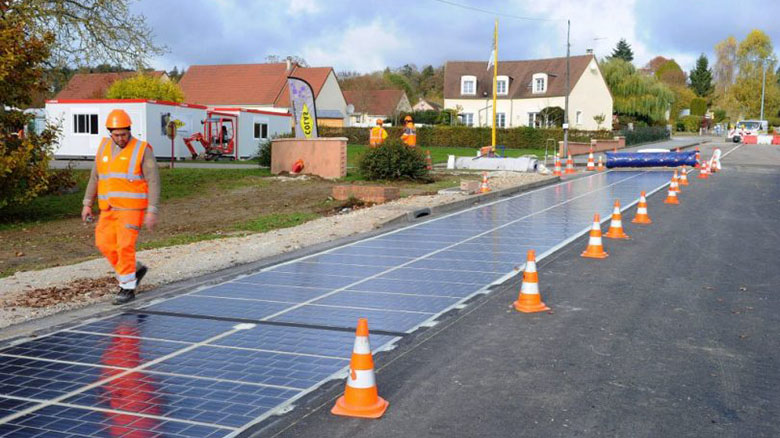 Electric avenues that can transmit the sun’s energy onto power grids may be coming to a city near you.

A subsidiary of Bouygues SA has designed rugged solar panels, capable of withstand the weight of an 18-wheeler truck, that they’re now building into road surfaces. After nearly five years of research and laboratory tests, they’re constructing 100 outdoor test sites and plan to commercialize the technology in early 2018.

“We wanted to find a second life for a road,” said Philippe Harelle, the chief technology officer at Colas SA’s Wattway unit, owned by the French engineering group Bouygues. “Solar farms use land that could otherwise be for agriculture, while the roads are free.”

To resist the weight of traffic, Wattway layers several types of plastics to create a clear and durable casing. The solar panel underneath is an ordinary model, similar to panels on rooftops. The electrical wiring is embedded in the road and the contraption is topped by an anti-slip surface made from crushed glass.

A kilometer-sized testing site began construction last month in the French village of Tourouvre in Normandy. The 2,800 square meters of solar panels are expected to generate 280 kilowatts at peak, with the installation generating enough to power all the public lighting in a town of 5,000 for a year, according to the company.

For now, the cost of the materials makes only demonstration projects sensible. A square meter of the solar road currently costs 2,000 ($2,126) and 2,500 euros. That includes monitoring, data collection and installation costs. Wattway says it can make the price competitive with traditional solar farms by 2020.

The electricity generated by this stretch of solar road will feed directly into the grid. Another test site is being used to charge electric vehicles. A third will power a small hydrogen production plant. Wattway has also installed its panels to light electronic billboards and is working on links to street lights.

The next two sites will be in Calgary in Canada and in the U.S. state of Georgia. Wattway also plans to build them in Africa, Japan and throughout the European Union.

“We need to test for all kinds of different traffic and climate conditions,” Harelle said. “I want to find the limits of it. We think that maybe it will not be able to withstand a snow plow.”

The potential fragility joins cost as a potential hurdle.

“We’re seeing solar get integrated in a number of things, from windows in buildings to rooftops of cars, made possible by the falling cost of panels,” Bloomberg New Energy Finance analyst Pietro Radoia said. “On roads, I don’t think that it will really take off unless there’s a shortage of land sometime in the future.”’