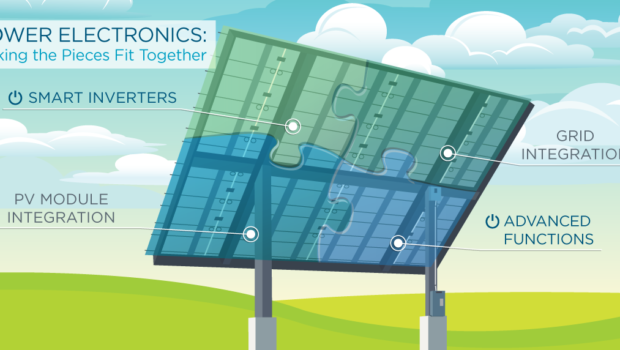 The Solar Technologies Office of the US Department of Energy has awarded research grants to several US universities to develop new solar integration technology. The goal is to reduce costs by 50% before 2030. The research will have two principal objectives.

“Power electronics projects will improve the reliability and resiliency of the nation’s electric grid by improving the interface point between solar and the grid,” the Solar Technologies Office sasy.  “These new, cost-effective power electronics designs will make solar energy controllable and eventually dispatchable through resilient microgrids. Further, advanced solar power electronics will help to ensure customer reliability when there are high penetration levels of solar.”

At the University of Texas, researchers at the Cockrell School of Engineering will focus on combining solar power production and energy storage into one integrated system, a process which if successful will lower the installation cost of solar power plants by 50%.

One of the keys will be the development of what are known as modular, multifunction, multiport,  and medium voltage utility scale silicon carbide solar inverters — M4 inverters, in industry parlance. The main function of an M4 inverter is the conversion of the direct current made by solar panels to medium voltage alternating current. The benefit of doing that is the elimination of the bulky and expensive 60 hertz transformers used in current systems, according to Renewable Energy Magazine.

“Our solution to solar energy storage not only reduces capital costs, but it also reduces the operation cost through its multifunctional capabilities,” says Alex Huang, who directs the Semiconductor Power Electronics Center at the Cockrell School and works with the UT Center for Electromechanics. “These functionalities will ensure the power grids of tomorrow can host a higher percentage of solar energy. By greatly reducing the impact of the intermittence of solar energy on the grid and providing grid-governing support, the M4 Inverter provides the same resilience as any fossil-fuel-powered grid.”

That level of resiliency is what led the Rocky Mountain Institute to declare earlier this month that renewables are now able to provide electricity to the grid with the same degree of reliability as traditional energy generation companies and for the same or lower cost. If the research funded by DOE obtains the desired result, the competitive advantage for renewable energy will get that much bigger.

While reviewing the list of lead researchers who will benefit from this latest round of DOE grants, I was struck by the fact that 7 out of 9 had names that suggest they or their immediate ancestors are immigrants from China, India, Pakistan, or another Asian nation. Why bring this up? Because time and time again, the clean tech stories I write for CleanTechnica are based on research by similar individuals.

Yet America is deliberately making itself a country where immigrants feel unwelcome. That bias at the highest levels against people who look differently, speak differently, think differently, worship differently, or have different cultural norms will keep others like them from choosing to live, work, and conduct research in the US.

The trend won’t be apparent right away. Like climate change, it will be a gradual process that takes years or even decades to reveal itself. But far from making America great again, it will turn the US into a nation that is intellectually impoverished. The result can only be a diminished rank in the world order and the transformation of a once great nation into an historical irrelevancy.

I would like to remind all those who choose to march with torches in places like Charlottesville to protest the presence of people of color, to those who think everyone on Earth should speak English, to those who compare black people to apes, to those who think the only good teacher is one who sports bandoleers of armor piercing bullets and carries an AR15 assault rifle, of this old adage — “Be careful what you wish for. You just might get it.’

A vibrant society is not like homogenized milk. It is like a smorgasbord, a collection of all the best foods from around the world. If you have never tried kimchi or baklava, how will you know what you are missing?

Elie Wiesel, the noted author and Holocaust survivor, once said “There may be times when we are powerless to prevent injustice, but we must never fail to protest.” We all need to do everything we can every day to promote a vision of America that includes all people — young and old, male and female, black and white. For it will take all of us working together to solve the daunting challenges we face if we wish to have those who come after us enjoy a safe, just, and sustainable world.