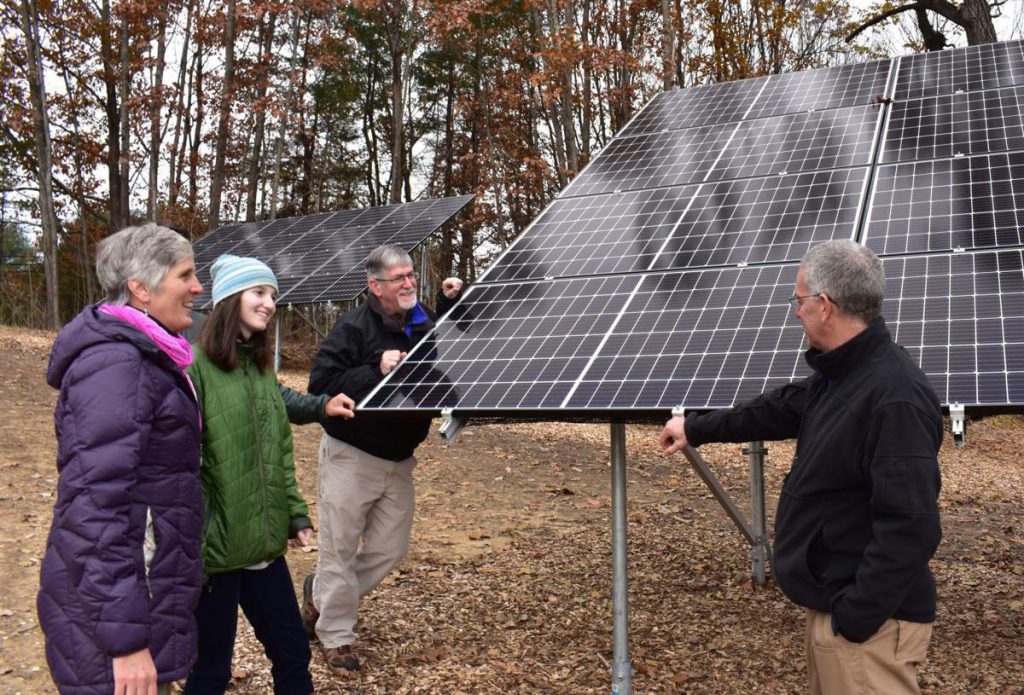 History was recently made at the Frosty Scoops ice cream stand when, under a unique-to-New Hampshire partnership, a photovoltaic (PV) array began generating electricity from sunlight for low income families in the Pemi-Baker Region.

Known as NH Solar Shares, the idea for the nonprofit initiative — which hopes to build and operate three other arrays in the Plymouth area — evolved from a 2016 community outreach by the Plymouth-based NH Electric Cooperative (NHEC).

At the time, the co-op wanted to know what organizations thought about it building PV arrays for the purpose of generating solar power that could be applied to the homes of low income families.

One of those organizations was the Plymouth Area Renewable Energy Initiative (PAREI) whose board of directors deemed the effort a “perfect fit” with its motto of neighbors helping neighbors to “reduce or produce” energy, said Sandra Jones, director of PAREI.

On Friday, Jones, who is also managing the start-up phase of NH Solar Shares, was among several dozen people who came to Frosty Scoops, not for the ice cream, but to celebrate the fact that since Oct. 29, the PV array there has been making electricity, albeit modestly.

The 28.9 kilowatt array will generate 36,000 kilowatt hours of energy annually, which is about a third of what the average U.S. residential customer uses, according to the U.S. Energy Information Administration.

The power from the array is purchased by the NHEC at an undisclosed rate, with the co-op then applying a monthly credit to the bills of ten local families.

The first credit will show up on those customers’ bills in January, said Jones.

Based on the current retail cost of electricity, which is 16.2 cents per kilowatt hour, the array at Frosty Scoops would generate a cumulative credit of about $5,800 a year.

In addition to sharing solar energy with low income families, NH Solar Shares seeks to increase the portion of clean renewable energy on the grid and to build healthier, more sustainable communities.

Participating families, who are enrolled for two years, will receive education about energy that will hopefully help them reduce their utility costs in the future while also making them informal energy ambassadors.

Jones said NH Solar Shares is eligible to be considered for a $500,000 federal grant that would let it build more arrays, since it had the Frosty Scoops array operating by an Oct. 31 deadline.

NH Solar Shares said on its website that each new array, like the one at Frosty Scoops, would “be inspired by a task force of local volunteers and be built using funds from grants, crowd funding, individual donors, fundraisers and the state’s solar incentive.”

Alex Ray, the founder of the Common Man Family of Restaurants, donated the land behind Frosty Scoops, which is part of the adjacent Common Man Inn & Spa on North Main Street, for the Plymouth array.

The project, which Jones said cost $122,000 to build, was also made possible by the generosity of individual donors and businesses, including Dunkin’ Donuts, Avangrid and ReVision Energy.Founded in 2004, PAREI has worked with more than 2,000 property owners, most of them homeowners, from Warren to Meredith and Thornton to Sanbornton, to help them “plan their energy future,” with the primary goal of helping them “use less energy” through weatherization and energy efficiency.

PAREI, through its NH Solar Shares partnership with the co-op, is now on the production side of energy and “the exciting thing about this project is that we’re bringing solar energy to a new demographic,” said Jones.

“This is the first community PV array completely dedicated to bringing power to low income families with an on-bill credit in New Hampshire,” she said, adding that NH Solar Shares continues to accept applications for the Plymouth array and for arrays yet to be built.