Renewable energy need of the hour 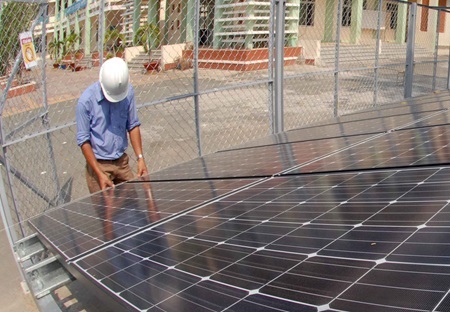 Viet Nam’s ever increasing demand is driving the development of renewable energy to help ensure the nation’s energy security, while protecting the environment.

This was revealed during a recent workshop held in HCM City to discuss measures to develop renewable energy in the nation’s southern provinces and cities.

Viet Nam is expected to consume seven times more energy next year than in 2010, and is likely to become a coal importer for energy generation after 2015, according to Ly Ngoc Thang, Deputy Director of the Centre for Renewable Energy and Clean Development Mechanisms under the Energy Institute.
An annual 13–15 percent increase in energy demand is estimated.
The country’s aggregate energy demand is predicted to reach 167 million tonnes of oil by 2030, well beyond its production capacity of 50–62 million tonnes of coal and 20–22 million tonnes of oil.
As a result, Viet Nam’s residential and business customers have begun to embrace solar and other forms of renewable energy, and this demand is forecast to rise four-fold by 2030.
Thang emphasised the need to develop renewable energy sources to gradually replace the use of fossil fuels such as coal, oil and gas.
Other participants suggested that apart from wind energy, Viet Nam should focus on other sources of renewable energy, such as solar, biogas and biomass.
With regular winds, over 3,300 kilometres of coast and 2,000-2,500 hours of sunlight every year, the country has great potential for producing energy.
Viet Nam, however, has only begun exploring the use of its promising bio-gas, wind power, solar power, and geothermal electricity resources.
Further, special attention has been given to researching and developing solar and wind energy as a replaceable source of fuel for the country.
According to the Energy Institute, a map tracking wind resources, jointly created by the Ministry of Industry and Trade and the World Bank, is expected to be completed by 2015, hopefully aiding projects seeking to create wind generated power.
However, energy development projects in Viet Nam, in general, and projects in studying and applying solar energy, in particularly, are still operating on small scales and suffer from a lack of applications as a result of financial difficulties.
Currently, HCM City has some 10 million residents who produce between 8,000 – 9,000 tonnes of municipal solid waste (MSW) per day, thus offering an opportunity to operate thermal plants and produce several valuable materials, participant said.
Nguyen Trung Viet, a climate change expert in HCM City, said MSW could see large economic benefits if the city paid attention to waste treatment and recycling technologies.
An estimate of more than 1 billion KWh of electricity could be produced each year from over 7,000 tonnes of waste produced each day in the city.
However, 95 per cent of this waste is currently dumped at dumping sites.
He called for State incentives to create more favourable conditions for investors in this field, such as developing capital support and price subsidy policies.
Experts at the workshop also called for clearing bottlenecks in administrative procedures and infrastructure for the sector’s development.
Source: VNS