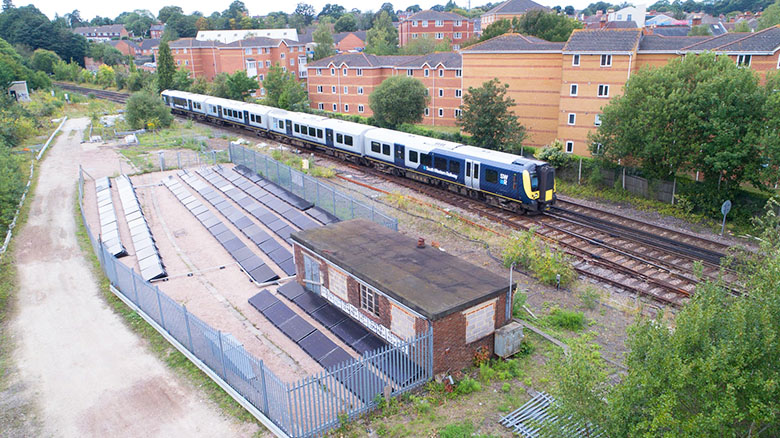 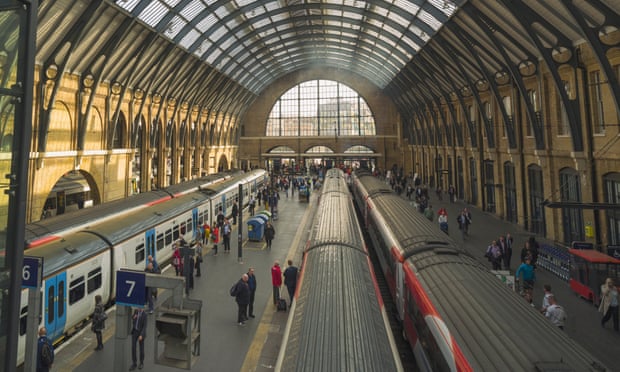 King’s Cross station. The move could pave the way for solar-powered trains across the country. Photograph: Sarah Lee/The Guardian

The world’s first solar farm to power a railway line directly is due to plug into the track near Aldershot, paving the way for solar-powered trains.

From Friday, about 100 solar panels at the trackside site will supply renewable electricity to power the signalling and lights on Network Rail’s Wessex route.

The 30kW pilot scheme could pave the way for a larger project capable of directly powering the trains that use this route from next year.

Solar panels are already used to power the operations of train stations, including Blackfriars in central London. But the Aldershot project is the first time a solar array will bypass the electricity grid to plug directly into a railway’s “traction” system.

Network Rail hopes to use the scheme, developed by the charity 10:10 Climate Action and Imperial College London, to solar-charge its rail lines across the country.

Stuart Kistruck, a director for Network Rail’s Wessex route, said: “We have ambitions to roll this technology out further across the network should this demonstrator project prove successful, so we can deliver a greener, better railway for our passengers and the wider public.”

The research team behind the project, called Riding Sunbeams, estimates that solar could power 20% of the Merseyrail network in Liverpool, as well as 15% of commuter routes in Kent, Sussex and Wessex.

There is also scope for solar trams in Edinburgh, Glasgow, Nottingham, London and Manchester, according to the team.

The researchers began work on the plans over two years ago to discover whether bypassing the electricity grid could make solar power a more efficient energy source for trains. Innovate UK awarded the project funding from the Department of Transport after it proved that connecting solar power directly to rail, tube and tram networks could help meet a significant share of their electricity needs. 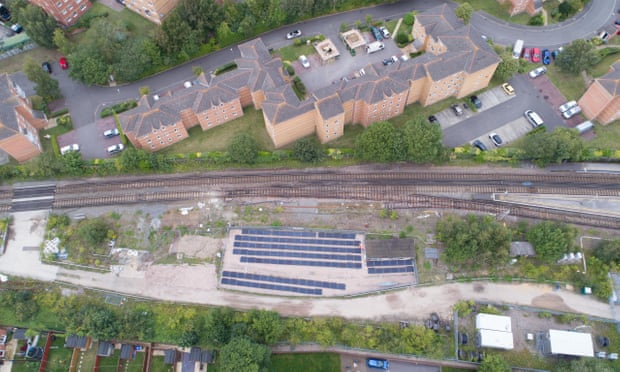 An aerial view of the trackside solar farm .

The falling cost of solar power technologies means these subsidy-free solar farms could supply electricity at a lower cost than the electricity supplied via the grid.

The findings come as plans to electrify Britain’s rail lines have faltered in recent years owing to concern about costs.

Leo Murray, the director of Riding Sunbeams, said future projects across the UK could be community-owned, and pay back benefits to local community funds. By the end of 2020, Riding Sunbeams hopes to build and connect the world’s first-ever full-scale community- and commuter-owned solar farm to UK railways.

Murray said the railways will be able to cut their running costs and benefit local communities while playing a part in tackling the climate crisis. “Matchmaking the UK’s biggest electricity user, the railways, with the nation’s favourite energy source, solar power, looks like the start of the perfect relationship.”

Murray added that the same model could be used across the world, particularly in sunny countries in South America, and India.

India is already home to 250 trains powered by solar panels attached directly to the roof of the train, but it plans to develop its own trackside solar farms because the weight of the panels means their trains need more energy than usual.

Indian Railways, the country’s single largest energy consumer, said last month it hoped to become the world’s first 100% “green” railway network in 10 years’ time by installing 30GW of solar generation capacity on some of its 51,000 hectares of vacant land.

The plan is part of India’s drive to replace polluting coal-fired power with cleaner energy sources, including as much as 100GW of solar power.

By 2025, Indian Railways expects to meet a third of its electricity demand from renewable energy sources by building 1.1GW from rooftop projects and 3.9GW worth of large-scale trackside solar farms.

As the crisis escalates…

… in our natural world, we refuse to turn away from the climate catastrophe and species extinction. For The Guardian, reporting on the environment is a priority. We give reporting on climate, nature and pollution the prominence it deserves, stories which often go unreported by others in the media. At this pivotal time for our species and our planet, we are determined to inform readers about threats, consequences and solutions based on scientific facts, not political prejudice or business interests.

More people are reading and supporting The Guardian’s independent, investigative journalism than ever before. And unlike many news organisations, we have chosen an approach that allows us to keep our journalism accessible to all, regardless of where they live or what they can afford. But we need your ongoing support to keep working as we do.

The Guardian will engage with the most critical issues of our time – from the escalating climate catastrophe to widespread inequality to the influence of big tech on our lives. At a time when factual information is a necessity, we believe that each of us, around the world, deserves access to accurate reporting with integrity at its heart. Our editorial independence means we set our own agenda and voice our own opinions. Guardian journalism is free from commercial and political bias and not influenced by billionaire owners or shareholders. This means we can give a voice to those less heard, explore where others turn away, and rigorously challenge those in power.