Solar Could Beat Coal to Become the Cheapest Power on Earth 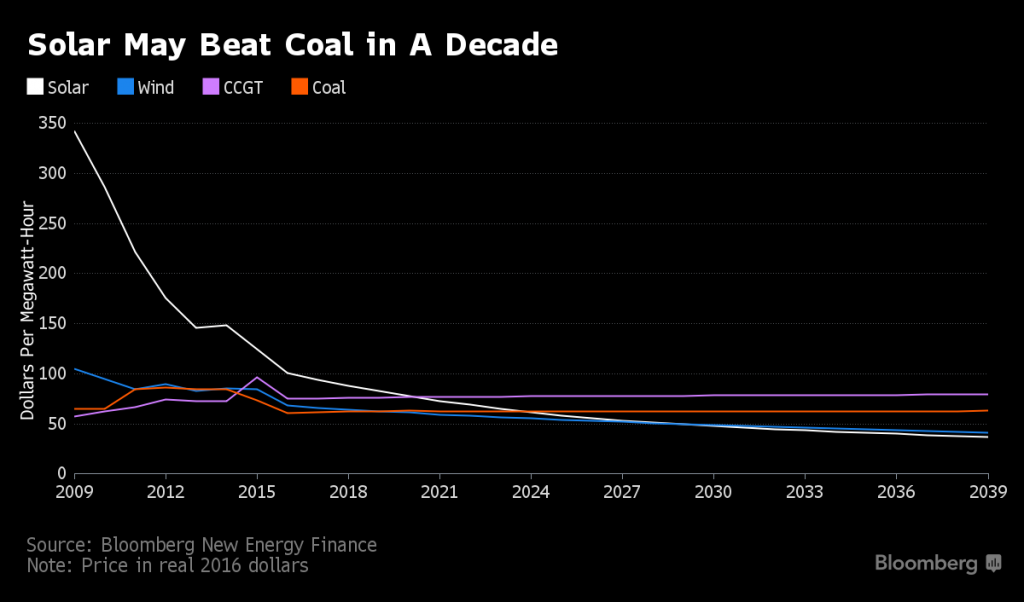 Solar power is now cheaper than coal in some parts of the world. In less than a decade, it’s likely to be the lowest-cost option almost everywhere.

In 2016, countries from Chile to the United Arab Emirates broke records with deals to generate electricity from sunshine for less than 3 cents a kilowatt-hour, half the average global cost of coal power. Now, Saudi Arabia, Jordan and Mexico are planning auctions and tenders for this year, aiming to drop prices even further. Taking advantage: Companies such as Italy’s Enel SpA and Dublin’s Mainstream Renewable Power, who gained experienced in Europe and now seek new markets abroad as subsidies dry up at home.

Since 2009, solar prices are down 62 percent, with every part of the supply chain trimming costs. That’s help cut risk premiums on bank loans, and pushed manufacturing capacity to record levels. By 2025, solar may be cheaper than using coal on average globally, according to Bloomberg New Energy Finance.

Better technology has been key in boosting the industry, from the use of diamond-wire saws that more efficiently cut wafers to better cells that provide more spark from the same amount of sun. It’s also driven by economies of scale and manufacturing experience since the solar boom started more than a decade ago, giving the industry an increasing edge in the competition with fossil fuels.

That’s in step with other forecasts.

The solar supply chain is experiencing “a Wal-Mart effect” from higher volumes and lower margins, according to Sami Khoreibi, founder and chief executive officer of Enviromena Power Systems, an Abu Dhabi-based developer.

The speed at which the price of solar will drop below coal varies in each country. Places that import coal or tax polluters with a carbon price, such as Europe and Brazil, will see a crossover in the 2020s, if not before. Countries with large domestic coal reserves such as India and China will probably take longer.

Coal industry officials point out that cost comparisons involving renewables don’t take into account the need to maintain backup supplies that can work when the sun doesn’t shine or wind doesn’t blow. When those other expenses are included, coal looks more economical, even around 2035, said Benjamin Sporton, chief executive officer of the World Coal Association.

Even so, solar’s plunge in price is starting to make the technology a plausible competitor.

In China, the biggest solar market, will see costs falling below coal by 2030, according to New Energy Finance. The country has surpassed Germany as the nation with the most installed solar capacity as the government seeks to increase use to cut carbon emissions and boost home consumption of clean energy. Yet curtailment remains a problem, particularly in sunnier parts of the country as congestion on the grid forces some solar plants to switch off.

Sunbelt countries are leading the way in cutting costs, though there’s more to it than just the weather. The use of auctions to award power-purchase contracts is forcing energy companies to compete with each other to lower costs.

“We’re seeing a new reality where solar is the lowest-cost source of energy, and I don’t see an end in sight in terms of the decline in costs,” said Enviromena’s Khoreibi.