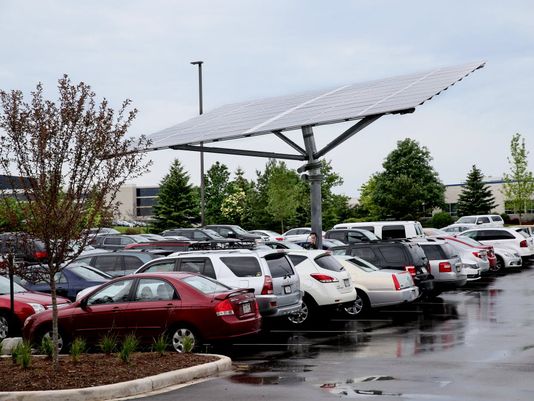 The U.S. solar power industry was on pace to install 13.9 gigawatts of electrical capacity across the nation by the end of 2016, which is nearly double the capacity installed in a record-breaking 2015, according to the U.S. Solar Market Insight.

This large solar panel was installed at the Kohl’s Innovation Center in Menomonee Falls in 2015. Kohl’s is one of the top 10 U.S. consumers of solar panels (Photo: Michael Sears / Milwaukee Journal Sentinel)

Data from the Solar Energy Industries Association notes that major retailers such as Kohl’s, Target, Macy’s, Wal-Mart and Ikea are increasingly installing photovoltaic solar panels on the roofs of their stores. Those panels can provide 30% to 50% of the electricity consumed by those stores.

Within 10 years, solar energy will be the cheapest electric power source on the planet, according to Agora Energiewende, a German think tank.

Werner’s career is another testament to the value of a Wisconsin education.

A native of New Berlin, Werner earned bachelor’s degrees in engineering at both the University of Wisconsin-Madison and Marquette University. He recently returned to his roots to speak to students at Marquette’s Opus College of Engineering.

Werner cites the obvious reasons for the growth in solar energy installations across the United States.

First, solar power is great for the environment, relative to electricity generated by fossil fuels or nuclear energy.

However, Werner says solar power has reached a threshold beyond being just a tree-hugger’s pipe dream. It is becoming a practical, viable and affordable alternative energy source, he says.

“The cost of a solar panel has come down 80% in five years. The solar industry costs and prices are coming down dramatically,” Werner says. “The solar industry is doing a really good job getting the costs down.”

“We expect growth to be at least 10% per year,” Werner says.

The meteoric rise of Werner and SunPower has coincided with the growth of the industry. When he began as SunPower’s CEO in 2003, the company had 35 employees and annual revenue of $4.5 million. Today, SunPower has more than 7,000 employees globally and it reported $2.6 billion in 2015 revenue.

However, the SunPower story is not 100% sunshine. In April, Congress extended the Solar Investment Tax Credit. While that adds stability to the industry, it also means that companies, schools and homeowners who would benefit from solar industry no longer have an urgent need to make those investments now before the credit sunsets — because they can wait as the prices of solar panels continue to fall.

Ironically, that conundrum is putting a momentary damper on solar panel sales, Werner says. That prompted Werner to close a 700-megawatt solar panel factory in the Philippines and cut 2,500 employees.

“With prices coming down, it’s caused some customers to be more patient,” Werner says.

Still, Werner projects that SunPower will generate positive cash flow from operations in fiscal 2017 and complete the year with $300 million in cash after posting $1.8 billion to $2.3 billion in revenue.

Meanwhile, as President-elect Donald Trump, who was not exactly an advocate for renewable energy in his campaign, prepares to take office, Werner is hopeful the new administration will at least take a “pragmatic” approach to the nation’s sources of energy.

“Solar is also critical to our nation’s economic competitiveness agenda. If America fails to innovate in this space, we fail to advance economically and as a society. Today, nowhere is this more apparent or important than with respect to energy infrastructure and innovation,” Werner says. “2017 is gearing up to be a pivotal year for our sector. For solar, in particular, we have a foundation that we didn’t have five years ago. The marketplace is in a night-and-day different place. Both government and the private sector have unique opportunities to build on it.”

Werner foresees a bright future for his company and the industry.

“At some point, you’re going to see the convergence of solar, battery storage and energy management systems,” he says. “That will essentially automate the use of solar energy.”