Solar energy at crossroads in Indiana 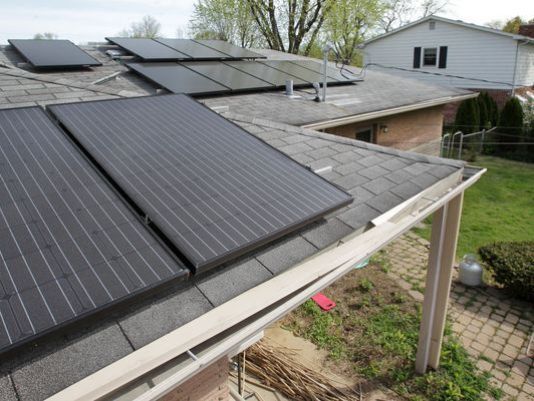 To hear solar energy enthusiasts tell it, the future of a growing Indiana industry is at stake, one that benefits homeowners, small businesses, churches and schools; that provides good jobs and, yes, helps the planet.

A bill pending in the Indiana General Assembly will determine much about the direction of small solar and wind generation in the state.(Photo: Charlie Nye)

To hear big utilities describe it, the solar industry is well enough established in Indiana that it should be able to stand without the incentives that got it off the ground, and that could someday become costly to other power customers.

Perspectives aside, there’s little argument that the bill being debated Wednesday in the Indiana House could be a pivot point for the state’s community of small-scale power generators — be they from solar, wind or other forms.

The pivot point, both sides agree, is Senate Bill 309, which has generated as much energy as any other issue in the legislature this year. It pits the well-financed utility industry — which has spent more than $1 million on campaign contributions to legislators in the past year — against a collection of grassroots groups whose members have crowded town hall meetings and Statehouse hearing rooms.

At stake with SB 309 is the financial incentive that helps offset the considerable installation costs of solar panels, wind turbines and other equipment for small producers, through a process called net metering. The incentive allowed them to sell any surplus power back to the utility companies at retail rates, currently around 11 cents a kilowatt hour. The bill would eventually lower the credit for the surplus to the wholesale rate, currently about of 3.5 cents a kilowatt hour.

Pushing for the change is a coalition of the state’s largest utility companies — Duke Energy, Vectren and Indianapolis Power and Light, among them — under the umbrella of the Indiana Energy Association. They say the cost of solar panels has dropped dramatically in recent years and, as the number of solar and wind users grows, the higher retail rate becomes a problem.

“When utilities pay retail price for energy, that cost gets paid for by other customers,” said Mark Maassel, the energy association’s president.

Yet Maassel acknowledged that the number of wind and rooftop solar generators is so small — about 1,100 — that the current costs of the subsidy may not even be a penny a month for the average customer. “But the point is,” Maassel said, “what’s it going to be next year, the year after and the year after that?”

Maassel said it’s not clear when Indiana could begin to feel those costs. Arizona, he said, didn’t factor the rapid growth of solar energy into their net metering structure, and average power customers began to feel the burden of the costs. “The point is,” Maassel said, “let’s set some certainty out there now.”

The author of the bill, Sen. Brandt Hershman, R-Buck Creek, has been the leading voice in the legislature for changing the system. He said, via email, “if the program is allowed to expand substantially under the very generous current subsidies, the costs to homeowners and businesses who do not use solar could increase dramatically and quickly.”

To address criticisms of Hershman’s original proposal, the Senate made some changes to try to make it more palatable. Small energy producers with systems already up and running would get to enjoy the retail rate for their surplus power for another 30 years. Those who install systems by 2022 would get the retail rate for their surplus energy for 10 years. Those who install systems after 2022 would get credited at 25 percent higher than the wholesale rate.

Opponents say the changes may help current small energy producers recover the costs of their rooftop solar panels or their wind turbines but that it will put new installations out of reach for people who otherwise might give them a try.

Phil Teague, who employs six people in an Indianapolis firm that installs solar panel systems atop homes and businesses, said he could see the residential end of his work drying up if SB 309 passes. Already, he was concerned that caps on how much power can be generated from renewables would soon stifle the industry in Indiana. If Indiana would continue the incentives and lift the caps, he could see himself tripling the number of his employees.

If the bill passes, the best Teague could say is: “I feel pretty confident about my ability to still be in business.”

One pro-solar organization, The Solar Foundation, estimates that Indiana employed 2,700 people in the solar industry in 2016, up from 1,500 the prior year. An estimate by the Environmental Law & Policy Center says that, in wind and solar combined, there are nearly 4,000 people in the industry across 64 companies.

Sanya Carley, an associate professor at Indiana University’s School of Public and Environmental Affairs, said, in the competitive marketplace for renewable energy jobs, the bill would remove Indiana from the states with policies that encourage growth. “They risk losing those jobs,” she said.

Carley, whose focus at IU is on energy policy and economics, said there’s no evidence that net metering adds to the energy bills of regular customers. The benefit in terms of jobs, pollution reduction and diversifying the state’s energy sources are real benefits, she said.

“There’s no reason to hurt the solar industry,” Carley said.

For Rev. T. Wyatt Watkins, a minister who has solar panels on his roof, on the roof of his east-side church and who is looking to bring solar panels to the rooftops of his low-income neighbors, the provisions of SB 309 are “toxic.” He refers to the big utility companies as a “monopoly” intent on preventing the development of a new energy source. “This nips in the bud any opportunity for smaller solar users to compete,” he said.

Instead of pushing ahead with the current proposal, Watkins said the legislature should put this bill aside and instead study the issue more thoroughly. “If we are afraid to study this,” he said, “there’s a problem here.”

The House Utilities, Energy and Telecommunications committee will hear testimony on Senate Bill 309 at 9 a.m. Wednesday in the Indiana House chamber.